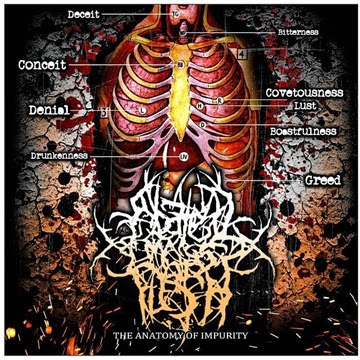 Abated Mass of Flesh come from Tennessee, US and they are a part of the new wave of brutal death metal, which seems to be in fashion lately. They don't have much of a discography yet and when I listened to their debut EP back in 2011 (one that I had gotten along with the 80.000 Dead EP) I couldn't really get into it, but I did not hate it either, it was a neat, noisy record. Two years later, they release two more EP and one of them is this, which is just wrong to my eyes.

The fans of BDM are almost immune to the flaws of the genre and will jamm on anything you give them, as long as it has guttural, eructating vocals and blast beats, and that's the only way to enjoy this. The songs here are very similar to each other and there is nothing uncommon in them to be any special, except the shredding two second intro in "My Cross To Claim" or in the middle of "Deadland", which again, is often used in such occassions. In general, they sound like the new era of Pathology, with a slightly dirtier production and a worse drummer. I mean, it sounds like there are four guys hitting random notes back there. The high hats are used too often and they are loud enough to toss everything else on the side, making the process of listening somehow staggering.

The vocal work is limited to the regular brutal death singing with some highs and you can listen to a few pig squeels in some moments, but that's about it, naturally. There is a bass drop on every corner of this record, as if it was used to fill the musical gaps and it does, in it's own way. At least they avoided the hardcore breakdowns. There is a sense of randomness to the compositional structure, as if they connected two different songs into one, or fused ideas in a goalless way. The  mini album closes with an instrumental track with a preaching sample about how important the love of God is, and that brings me to my last point, the lyrics. It is a christian band and I can't help but laugh about the content, Give me strength o, Lord.

To sum up, I think "The Anatomy of Impurity" targets it's audience to those who like religious content in their music, as well as the fans of brutal death metal, but it might seem repulsive to anyone outside. Apart from that, it is rather nonchalant on it's own and there are definitely better things in that scene for you to check out.