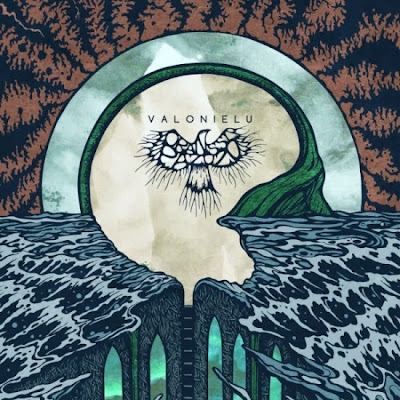 Rough days need rough music and I was not anticipating a new offering by this band, it totally caught me sleeping. Do you know Oranssi Pazuzu? If not, you should. They are the patronizers of psychedelic black metal, adorning a whole new side of the genre with their peculiar incarnation of sound. Formed in 2007, the Finnish surrealists arrive to question your standards once more with their third album Valonielu, which to me, is a mysterious gateway full of enigmas and riddles. Judging from the band's statement "Oranssi Pazuzu makes music that invites all the arsonists and smokers to hold hands", I think their vision fits this blog perfectly and I'm definitely re-examining their older albums as well.

The band's music emphasizes on a bizarre amalgamation of various unconventional styles while mainly revolving around black metal, forging a unique and intriguing sound, which gives them an identity among numerous look alikes in the scene. Coming from a non-metal background (the members were playing in weird rock bands before this) and having no knowledge on how to create traditional black metal  is a bliss and a key element for them to go on and create something that amazing. The psych here is enormous and unexpected sounds pop out of every corner of the album, introducing elements of ambient, space rock and 90s black metal.

Oranssi Pazuzu dare to prolong some of their tracks up to eleven and fifteen minutes, challenging the listener's patience and fooling them into one bottomless pit of psychedelic utopia. After several listens, I still feel I have not fully consumed the tasty content of the album, which appears to have more and more hidden sequences that need close attention to grasp on. The album was produced under the aegis of Jaime Gomez, who has also worked for Ulver, Hexvessel, Gates of Slumber... So it was in the hands of a professional. I sensed the band's potential with the first two albums but this is overwhelming, I am impressed.

The reigning atmosphere during the album is this of the late sixties and early nineties, achieved by plenty underground prog / phychedelic rock bands as well as the ultra legends Pink Floyd. Or, to be more exact, it goes a little deeper and darker than that old scene, not only with the doses of black metal but also with the synths themselves. Absorbing all sorts of bizarre noises, the tracks contain catchy guitar riffs melded with hypnotic keys and screeching screams, driven by a smooth rhythm giving drum work.

Over it's 42 minute length, it offers a trippy experience into your subconscious as you're swallowed by it's alluring beauty and smartly executed compositional variety. New bands with a strongly personal and monumental sound like Oranssi Pazuzu are the ones who own the future for their delicate visions, as I would gladly swear that you have not heard something like this before. Combining their influences flawlessly, they build an addictive album that flows as a calm river and is probably going to stick in the listener's ears for some time. Instead of a fast-paced tempo, they move in a moderate speed so that the droning components can be experienced, giving time to grasp on the more than enough samples and synth lines.

A good example of my aforementioned comments is the opening track "Vino Verso", which kicks off with a druggy and a simplistic note riff, going on for almost it's whole length. The keyboards hold the leading role and characterize the song, launching new tones one after the other and establishing the band's elements all together on the table. A druggy/space feeling is created and the pure black metal elements are a minority, mainly in the vocals.

The second track "Tyhja Tempelli" is one of my favourite on the album, due to it's sick and dark vibe, deriving once again from the synths. It's slow and ailing, like the instrumentation of a dying junkhead, or a soundtrack to a deranged psychological movie. Their focus on mind games and creating hallucinations via their music is more than obvious on this brilliant four minute track.

"Uraanisula" begins with a slow, depressive introduction that fits the black metal pattern, then comes a small great sample before it's main part. Here, the clobbering melodies and riffs can be relegated to modern Swedish Shining, evenly painful with more electronic characteristics. The middle of the song is subdued by unclear samples and jamming guitar randomness, with a steady tone from the bass and the drums. Towards the end, it speeds up and leads to one of the most frenetic moments of the album. The track is quite long, as it reaches eleven minutes.

Track four "ReikA Maisemassa" is purely psychedelic. It's gloomy and fearful with lot's of unexpected notes that refer to complete technological disorder, it features simple toms and keyboards, painting the room with several, brightly-coloured lines, circled and squared. Bringing back the original vibe, "Olen Aukaissut Uuden SilmAn" is dangerously digging inside your brain with grinding sc-fi synths and the same, stinky way that they have by now made known.

The final track "YmpyrA On Viiva Tomussa" climbs up to fifteen minutes in length, above every other in the record. The calm, vivid intro that slowly builds into a main part sounds like a post-black metal song but much more maniacal, similar to a product of dementia. A bunch of unbalanced synths dominate the battlefiend again, involving bulky instrumentation, even when the sky seems to clear. It portrays the band in it's entirety, as they have used time in their favor to include all the major characteristics of the album into one, solid construction. It might seem chaotic and random, but the album has a high level of consistency, each track rendering to the album's flow by leaving and open connection with the next one, thus being a great all together listen.

All in all, Valonielu elucidates how talent and originality can create an astonishing piece of art, in any form of art, as well as music. It is fairly reasonable that Oranssi Pazuzu have not reprinted the pure and raw style of their country's scene like Behexen, Sargeist or Horna, so don't expect this kind of black metal here. It is more psychedelia and less metal with bits of science fiction and drugs, a legit sound and a ridiculous assortment of concepts. Influenced by unrelated bands, this musical hodgepodge is to be played and replayed until reality can't be distinguished from dreams and matter is no more.