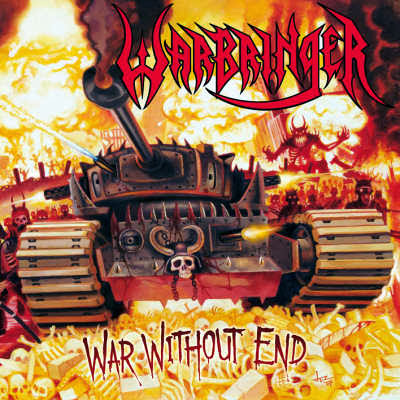 Contradicting the opinion of most die hard thrashers, I don't believe the genre died after the eighties and I often discover little miracles by newcomer bands, either famous or unknown. California's Warbringer are by now a gigantic name when it comes to the modern scene and not only, since they are kind and respectful to their craft, which pays back with supreme noise. Debut War Without End is by far the most old school and raw approach, scuplted to perfectly fit the rotten ears of old, bastard beerheads, isn't it? Just look at the titles and the artwork, or more precisely, the music.

The band aimed for a dirty production, taking advantage of the modern studio machinery to avoid the unbearable fuzziness. A problem one often encounters with the old underground bands when listening to them twenty five years later is how the sound was poorly taken care of, focusing on the overall madness instead of any actual purity. No one could blame them for their inexperience in recreating the sound of thrash since it was then taking form and it's not a big deal either (many fans actually want it), but I believe today it's somehow a must. That been said, War Without End is very pleasing to the ear without being a bitch of the trigger effect, making it look honest and from the humble heart. The gargantuan badass Bill Metoyer has been the producer for this, who has also done legends like Slayer, D.R.I., Flotsam and Jetsam, Dark Angel, Sacred Reich and others. All the instruments are audible but not crystal clear, born in the 21st century but aching past decades, a combination of Warbringer's passion for their original bloody roots, but not a worthless replica of them.

Which brings me to a drawback of the overall album, which is the eternal problem of repetition. Even though there are a lot of ideas going on, it doesn't reveal a personality behind the curtain of old bands like Kreator or Vio-lence, with a couple of restored riffs here and there. For the most part, Warbringer are demonstrating their own muscle power with plenty of good composition parts, but it get's too hard into binding them together, leaving them the option to do it the old way. This little bug hardly will change the minds of those who listen to it, when the music is straightforward and bludgeoning as this. A fastidious listener would point out the washy recycling, but it's not even right there. It's just below the surface.

Breaking the album into parts, the guitar work is diverse and amazing. Riff after riff, solo after solo, it keeps a very fast tempo as it should be and gives away variety and entertainment for about forty minutes. It is clearly above the typical thrash metal bands, counting 4-5 or more riffs in each song and about the same solo analogy, with a few arpeggio patterns, tremolo picking and a accustomed aggressive attitude. The concept album was not chosen by luck and it's very close to the essence of the music, which is a hundred percent warfriendly and combat ready. There are several war samples as well like guns, bombs...

Moving on with the vocals, which are breathtaking. They are harsh, steady and powerful, with several stunning and memorable moments like in the bonus track "Nightslasher" (which is an old song named "Zombie" that was re-recorded), or in the standout track "Total War", where the screams are touching heaven in quality. The vocalist is a problem for me four out of five times in modern thrash and Warbringer paid back for the rest of the morons that destroy a band's good music with their awful vocals, therefore this was made just as amazing. The drumming is fast and varied, even though I don't like the random hits in a moment or two through the album, like in the beginning of the main part of "At the Crack of Doom", which has a hell of an introduction by the way. They are right on the spot in almost every song, but it feels like the drummer could not think of how to fill in at some point so he just hammered down the snares for a few seconds. I noticed a little bit of black metal drumming sometime, quickly switching to other picks.

I can't say it's classic material in this album, but it's definitely over the limit of mediocrity. For the music contained, the listener fully gains quality for the time spent, with Warbringer clinging onto the waves of thrash, playing around the Bay Area and the  heavier extreme of Europe, with splendid musicianship and a coherent content. It's definitely great for it's kind and you know you will like it because you somehow expect it, as the personality of the band is depicted in a few moments and not in the whole album. It secretly gives away the form they would later take, which is more unique and glorious.
DAMAGE: 7.5/10 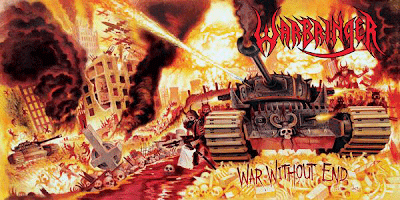