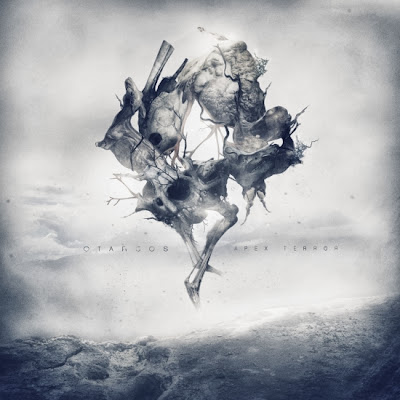 All of you theistic black metallers should stand back. Here is a band with clean sound, grooves, solid production and a non-religious subject. Are you angry yet? Otargos hail from France and this is their fifth album, containing nine tracks of modern black/death metal, with characteristics of both genres but as a whole, reminds little of the two. It sure is something of their own, but I can't feel any power behind the fancy blast beats and groovy riffs.

The album opens with the self titled tracks, which mones on a fast pace and is pretty much the fastest they managed to go, with a simple pack of pummeling drums and simple guitar lines, a few solos and a weird as hell vocal sound in the middle of the song. As an introduction to the album, I sense that these guys are good musicians, but they have mixed many different elements together in a sloppy way, as if they relied on the perfect production the album has. The second track Fleshless-Deathless is slower and depends on the blast beats and the regular rhythm of the drums in general, failing to cause any impact whatsoever. After another weak third track For Terra comes a chunk of hapiness with Remnant From A Long-Dead Star which starts with a slow melody and a church bell behind it, the only catchy part of the song

The fifth track Fallout has some interesting stuff going on inside it, finally. It's significantly faster, has some traditional ideas that can't easily fail and it's one of the heaviest on the album. With a needless interlude "Xeno" we move one to seventh track, into the second half of the record. "Drone" starts with sample vocals and continues from where Fallout stopped, and it finally has some guitar work that worths listening. A couple of riffs are amazing, remind of the modern Swedish scene and stand out compared to the rest of the mediocre work.

The penultimate Aftermath Hyperion and final Versus don't go anywhere further and share very few stimulating moments. "Apex Terror" is just another piece of extreme metal built inside the studio, where the mastering is used to boost the sound so that the actual music is left on the side. Behind the intimidating sound, the musical amalgam of Lamb of God grooves, black/death metal drums and double layered growls is hesitant and unsteady. I doubt this will please anyone but the Dimmu Borgir and Behemoth kids. No offense to these two bands.