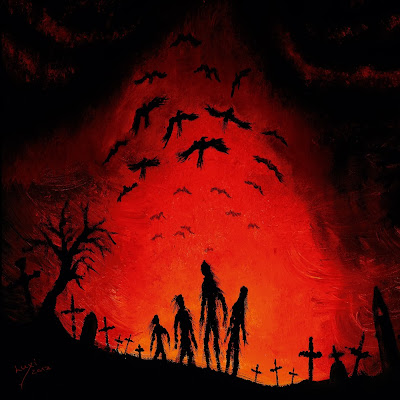 It seems like a lot of bands from the past are coming back with new releases after a lot of years (Sorcery and Protector come to mind). The old school fans have no right to complain about anything anymore, since not only the old bands arise from their ashes to release new music, but also there is a whole scene of newcomer bands that play as if they still live in the late eighties and nineties. When I first found Convulse, I fell in love with their debut album A World Without God, for it had the amazing sound and that particularly amazing feeling that old bands bring inside you when you listen to their forgotten, buried records. Then, I was a bit let down by their sophomore Reflections, and left the band into cold ice. Almost forgot about them. When the reissue of World Without God came out in 2010 it hit me that these guys might be back together, without thinking of a new release at all, something that made this album a surprise. In fact, I was not sure of who this band is, because the name didn't ring any bells at first sight. There are new members, the drummer and one guitarist, hired by the other two, original members, the singer/guitarist and bassist.

Getting down to the content, Evil Prevails is a dark, intense, old school death metal record from guys that seem to never get old. I'm glad time has not erased their urge to make great music and I'm talking about one of my favourite comebacks of the year, to be exact. A problem I often encounter in such cases, is that the frontman usually has lost his deep growling voice and goes with softer, shouting vocals instead. It works fine most of the times, but I personally prefer the downtuned, rancid vocals in death metal, and that's what I get here. Rami is a magnificent vocalist and he demonstrates his talents not only with his unearthly growls, but also with some clean vocals that are inserted in the more silent, doomy, acoustic minutes. The slower, grimy parts in the tracks remind me of the doom side of Autopsy, less frequent but in the same vein.

I'm pretty straightforward with what I want from this kind of death metal and such experimentations rarely pass the test for me, but this time I found it delicate, smartly used, a great addition in general. There are plenty of fast-paced hammering parts for you to enjoy anyway. The songs are built around numerous riffs and solos, enhanced by a great vocal and drum work, worshipping the first wave of Finnish death metal, with them being a significant part of it in the first place. If one would ask pure old school riffology in this album, it is exactly what one will get. Plenty of them, good varations in each song, with the proper way of using breakdowns and an overdose of agressiveness pouring out of every single line.

The now matured musicianship here helps a lot to the clear band improvement, in terms of composition and album structure. It flows nicely, warms your heart and caresses your ears, leaving a strong feeling of you traveling through time back into the tape trading era. With a production pleasingly raw to the fans and unfriendly to the outsider scene of modern meloshit, it builds it's own walls of protection from the unaware and repays it's followers with a remarkable, non stop trip of brutality. Lyrically, they don't go far from the familiar subjects, like genocide and war, as well as religion, pretty much the same like what they included in their debut. Not to mention the captivating cover artwork, done by the common suspect Luxi Lahtinen, who has been active into the painting business in the early nineties, drawing for bands like Avulsed and Demilich.

This is well written, accurate and relentless death metal, from the beginning to the end, executed by masters of the area, leaving the listener with very few to dislike, if any. You will find blast-beats, doom additives, clean parts, but all of them revolve around the old school attitude of death metal. The whole package is exactly how the job is done, but if I was to choose some standout tracks, these would be Days Are Dark, Unholy War and Reborn In Chaos, each one containing some of the best moments of the album, which ends with a sound of babies crying. What we get here is forgotten death metal with several new school elements as an enhancement. It is an enthralling album with enough, non-repetitive music for you to enjoy, without stepping into the trap of being a replica to all other, usual and simply good bands. It turns out Convulse had still some ideas to work on in the rear.