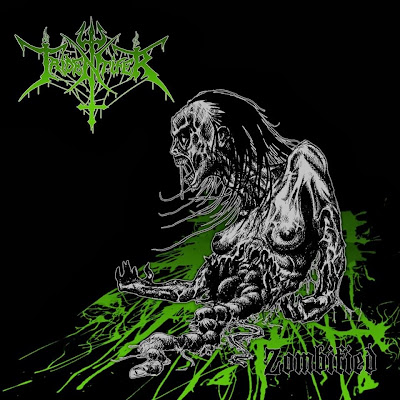 At first, I confused the band's name as Zombified and thought it was the Swedish grindcore / deathmetallers, but the logo and the art did not remind me of anything so I thought that I misunderstood. Now, the band's name is Tridentifer and they are a newborn band from Germany, having no official releases apart from this debut demo. They operate with the pure, non-additive side of death metal, strictly inside it's borders and with hardly any surprise characteristic, which works both in their service and against them, depending on the listener's frenzy on the genre.

Four songs reside in this demo, which from the looks and only, gives a reliable idea of the band's objectives. Simple, mutilated corpse, probably traditionally drawn with classic fonts and green colour on the logo and blood, is very close to the cornerstone of every self-funded band's first steps. As one descends into the noise, everything goes by the plan. The production is rough and sharp, flirting with the sound of modern old school death metal bands like Entrails or Revolting, without necessarily copying the Swedish formula. Moving mostly around middle-paced patterns with a lot of groovy/blast-beating moments, their music is not hard to headbang to, despite the fact that it's not anything new to an experienced listener. Of course, releases like these are self-limited into the scene and only and this one will attract very few, if any people outside from death metal. Besides, I'm positive these guys do not really care about that and with hard work, they could accomplish a solid full album. It's not hard to make a listenable demo, pleasing to the fans for a short period of time, the true challenge lies in making it memorable and Zombified does not really do that.

The mastering and mixing are good for a first demo, achieving a clean and discernible sound that keeps it all standing. The riffing and drumming lines are rather regular, predicable and overall not that amazing as you would want, even though brutality is involved here, especially with the semi-shouting and growling vocals, very much influenced by the northern bands. I had a hard time trying to listen to the bass and I can't seem to come up with it's shining moment, thinking that it was kept in the dark on purpose, for a steady rhythm or something. The record starts with "Bloodwine", which contains a sample of sea waves and sound for about half a minute, then getting into flogging melodies that feature a legit solo towards the end, which again, has a sound of a shooting cannon. It's a short song that shows the narrow but well used pack of ideas they have, while the second song song "Zombified" does not change anything. The penultimate "Of Days To Come" is the longest track and the best on the demo, staring with a clean guitar intro and getting into a main part with interesting guitar lines. The fourth track "Ripping Cancer" is another concrete track, it opens an mechanic made intro and it has a staunch structure, based on it's familiar riffs.

Tridentifer do not bring anything new to the table with their debut demo Zombified, which would be really better if they had some faster and heavier parts, instead of the easy ones they had now. The several good moments were a bit ruined by the drums, as the slow blasts were fuzzing everything out. The band is still looking for it's sound and it has a way to maturity, but that doesn't hold them from creating an enjoyable, average release. It left me with an impression of indifference after it ended, still I believe that they can grow into something more complete if they stay focused.