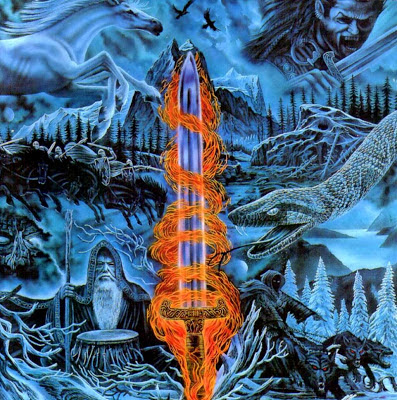 For the record, Dead had met Quorthon but he didn't like him that much because he was a poser. Furthemore, Quorthon later stated that the first Bathory albums were failures and the real Bathory started after Hammerheart. Just some interesting facts to look back to now, about twenty years later or something, knowing how everything happened.

Tagging this album was a pain in the ass. I was aware of the fact that i had the re-press that was done in 2003, with the same compositions as 9 songs instead of the original 10 The Woodwoman and The Lake are contained in one song, same with Intro and Blood On Ice). However, my rip had 10 songs with completely wrong titles, so i retagged the whole album. I double checked it afterwards, still if you notice something weird, give a shout.

As for "Blood On Ice" itself, it is one of my favourite Viking era Bathory albums, if not my favourite. It has some classic songs in it and provokes this epic and cold atmosphere without a whole zoo animal orchestra and all kinds of extraordinary musical instruments behind it, as.... Well, as every viking metal band does today.

By VJ-atyc at January 19, 2013
Email ThisBlogThis!Share to TwitterShare to FacebookShare to Pinterest
Labels: Table B, Viking Metal