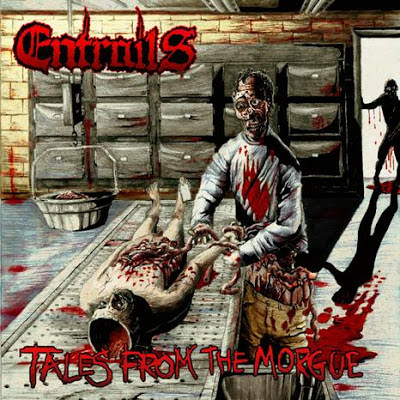 
Entrails origins go back to the beginning of the 90s, but they disbanded and they reformed 4-5 years ago, in the meantime they released 2 full length albums, one of them being this one. Having the soul of the old school, the guys have blended the best parts of that era and made the album for fans and not only.

Their first attempt is direct and raw, in terms of music and aesthetic. With legit production, they unfold the ideas they've been keeping for about twenty years now, covered under a veil of modern sound but still sounding old school as can be. Semi-growling, semi-shouting vocals, probably a result of getting older and the characteristic of swedish death metal, blasting drums and vicious guitar and bass lines, all together performed by the same guys that were around when this shit was invented. Good job.
By VJ-atyc at January 12, 2013
Email ThisBlogThis!Share to TwitterShare to FacebookShare to Pinterest
Labels: Death Metal, Old School Death Metal, Table E