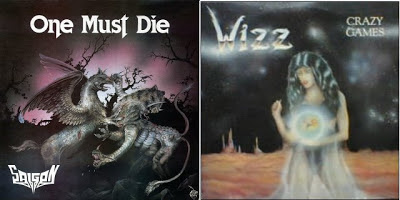 1. Saigon - And One Must Die 2. Saigon – Black Sinner 3. Saigon – Evil Night 4. Saigon – Feel The Power 5. Saigon – Live For Today 6. Saigon – Under Attack 7. Saigon – The Hunted One 8. Saigon – Game Of Mystery 9. Wizz – Smash 10. Wizz – Wonderland 11. Wizz – Upside Down 12. Wizz – You're Not Alone 13. Wizz – Crazy Games 14. Wizz – Not To Old To Rock'n'Roll 15. Wizz – Far Away 16. Wizz – Movin' On
This post is the second member of the Heavy Metal Alliance which is basically a combo of two albums that were released as a 2 to 1 pac under that weird label with the lame name i have not heard before. Saigon and Wizz here, typical heavy metal bands in the same wave as Karo and the rest of the bands that will come. I sense its a bit rare too, i collect CDs but i dont have the collector's vein, since i don't hunt first presses or anything.
By VJ-atyc at January 26, 2013
Email ThisBlogThis!Share to TwitterShare to FacebookShare to Pinterest
Labels: Heavy Metal, Table S, Table W