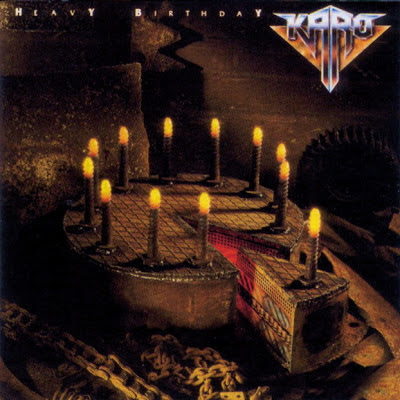 Ι had informed everyone about a treasure chest full of colourful happy goods disguised as a dirty bag in a garbage bin. I had, in my Wolfcry post a couple of months ago, so i believe its time to get started with the Heavy Metal Alliance. Why is it called like this? Because i thought it was a sweet name about five minutes ago and since they all were an unexpected gift around the same style, i should label them as a gang.

So, first and proud member of the HMA (Already into acronyms, see? Its popular) is the one and only album by the german Karo, a mix of hard rock with some 80s heavy metal elements, nice and nostalgic about the particular era. Keyboards are also used in the songs. The frontman later recorded some other albums, but i do not really care.

And some subjects irrelevant, because hey, this is a personal blog:

1) All hail the HMA.
2) Im writing an exam on Linear Algebra tomorrow and im sitting here doing nothing for you. Not because im addicted to this awful and dark thing, for you.
3) This song is awesome. You heard me.
3) I might post a big package tomorrow, depending on my mood, which depends on the results of number 2.
4) The Living Doorway is up again. All of us, the rest of the bloggers, shall rest.
By VJ-atyc at January 21, 2013
Email ThisBlogThis!Share to TwitterShare to FacebookShare to Pinterest
Labels: Hard Rock, Heavy Metal, Table K