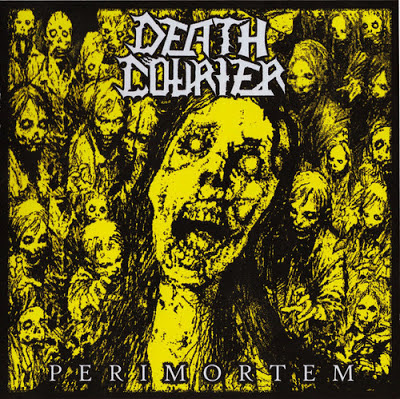 Death Courier are one of the first death metal bands from Greece, formed back in 1987. After a bunch of demos and a full length in 1992, they split up, but one guy from the band brought them back together in 2009, adding two new members. So, this year, twenty one years later, we have a second album entitled "Perimortem", which means at the time of death, or near the time of death. It is a noticable comeback for the greek metal scene, since the band is of some importance in the history of extreme sound here.

The new album has clear production and it can be described as thrash / death metal. There is nothing extravagant about it, just plain and simple brutality with fast jamming tracks. There is a basis of a riff or two and every song is constructed around them, adding a typical drum line and solid growls. The production is pretty neat and there is a balance between the instruments, a major improvement compared to the noisy early recordings they did. Either way, its all a matter of taste on that aspect, some people prefer raw brutality with a noisy production, some other people like me, admire the clean sound new studio machinery can provide. The lyrics revolve around psychological sickness and serial killers (there is a song named "Rostov Ripper", look that guy up).

What i don't like about this album is its length. There are nine songs here lasting 1-2 minutes each, so we have a total of twenty minutes for a full length album. They could easily make a bit longer songs to add fifteen minutes more and it would not bother, because now, its clearly a short album to listen to. Its even shorter than the tradition of modern brutal death metal bands to make twenty five minute albums that are also considered consise for me. Apart from that, i enjoyed the songs and its nice to see these guys playing again.