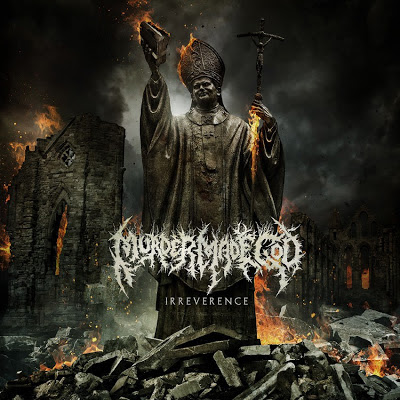 Murder Made God are a greek death metal band and this is their debut full length, It is the continuation of Human Rejection, since they decided to change their style a bit. I had heard the promo they released in 2011, which was solid by all means but not enough for me to judge them, a new full album is great news for sure. The scene of modern death metal in Greece seems to be getting attention the last few years and several good bands have arised in that period. One example is Murder Made God that finally establishes a name with a complete work "Irreverence".

They play in the veins of bands like Job For A Cowboy or Dyscarnate, which means crystal clear production, fast and heavy riffs, powerful growls (almost touch the Brutal Death area) and, for fuck's sake, blast beats. Seriously, this album is just full of blast beats. Every song is covered 80% by them, which is neither positive or negative, just a matter of taste. I think they are necessary in a death metal band, even that much. Thank Satan they do not use any cleans, or high vocals, or shrieked vocals, common in melodic/modern death metal and almost always awful.

Another aspect that depicts their modernity is the concept and lyrical theme, since its not the old fashioned gore subject. No murders, rapes, tortures or other diversions are discussed here. As the cover might give a first impression, the lyrics are mostly about social issues and the manipulation of the masses. They definitely create some brutal music, and they are good musicians as well. After listening to the album though, i didn't recognize anything memorable or unique, i guess its a great album for the scene that will please the fans, but it is as great as 100 albums before it.