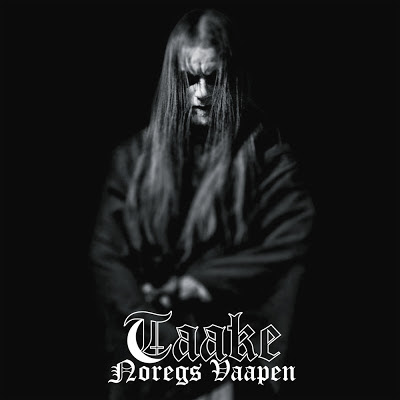 Despite the fact that the rise of Taake arrived a bit later than the rest of their countrymen, i consider them to be one of the best norwegian black metal bands, with a distinctive and powerful sound. They are at the top of their field, with majestic albums and live appearances. When Noregs Vaapen was close to be released, i was wondering if it would be as worthy as the rest of their albums, since they are all pretty much amazing.

There are awesome riffs coming one after the other on every song, masterfully crafted and well composed. It sort of keeps your mind busy trying to undertake all the hazy but still as clean as should be sound of the album, it lacks repetition and doesn't let you any margins of getting drifted off. From the beginning to the end, the instrumentation here is flawless and outstanding. The combination of heavy and black metal is common nowadays but rarely works, yet there has been a smart and triumphant melding of the two genres this time. All the different ideas of guitar work, strong shrieked vocals and fast drums created killer tracks that make the album a thrilling experience to listen to.

They have been a band really close to the core of the norwegian black metal sound, changing and evolving with every album at the same time. This is strongly present here with more variations and additions, the most apparent here being the banjo. Yes, there is a banjo used in the song "Myr" and im telling you that it fits perfectly. They made a banjo sound heavy and its fascinating. There is a mellotron at the end of the first track, adding yet another musical diversity to the band. Such a record was bound to have awesome guest musicians as well, there is Attila granting a bit of his unholy talent on Nordbundet, as well as an Emperor cover at the double LP version. Nocturno Culto also appears.

Alongside the new experimentations that can be found in the album, there are traditional songs that could easily be a part of their other releases, something that helps the album satisfy any kind of fan of their music or the genre as a whole. They surprise us with every new album and that's a sign of constant improvement.