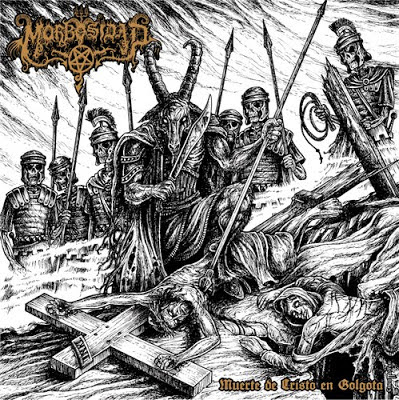 Morbosidad are an infamous band among the fans of this particular style of black / death metal. They've been around since the early 90s and they have not strayed from their path ever since. For the record, two drummers have died while being in the band. Useless but still interesting information. I believe that Blasphemy are the originators here, even though other similar bands existed at the time, for example Profanatica or Archgoat. I sense that is enough information for you to understand what these guys play, more or less.

In general, i dislike other languages in the titles of albums/artworks, apart from english, and this time is no exception. This genre focuses less on the talent and more on the anti-religious and blasphemic content, which i can not feel when i have no idea what they are talking about. Even though the lyrical theme is heavily predictable, i expect some kind of offensive title a la Havohej. Spanish is really not of this use, this just looks lame and funny. I have encountered such albums in the past and even when the music is good, im not in the mood of replaying after it finishes. Who knows, maybe they have their own, unique and strong fanbase in South America. I can't think it will spread across the borders though.

There are twelve songs that barely reach half an hour or a bit less, which is a typical nessecity for an album like this. Even though im not the biggest fan of this musical tribe, i think it a complete failure. Most of the songs sound exactly the same, composed and produced in a sloppy way, without anything to offer to the listener. I know it is supposed to be satanic and bestial, raw and agressive, but compared to black/death metal artists, it is a child that had its lollipop stolen. Ironically, the cover of Archgoat's Hammer of Satan is the best song on the album.

I would say skip this band, but i haven't checked their whole discography closely (i probably won't either) since there are other bands that i prefer spending my time listening to. Muerte de Cristo en Golgota, which apparently means The Death of Christ in Golgotha is nothing special. As the title suggests banality and boredom, the music gives you and a worse impression