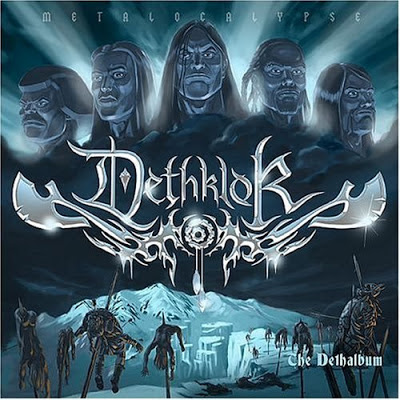 Dethklok is a fictional band that was created for the series "Metalocalypse", starting back in 2006. This show is animated and its about a killer death metal band that rules the world. Their fans die in shows, they destroy nations with their gigs, they live in a moving fortress called Mordhaus with a bunch of executioner servants, they are being watched by an Illuminati group because their actions affect global economy, and a lot of other crazy stuff for you to watch. If you wonder who is behing all this, more information can be found here.

Now, that band also plays music in the episodes, which are later released as albums by the band. There are four seasons and three albums so far. The series is mainly comical, even though it has plenty of bloodshed, dead people, torturing and other delightful activities. Which are still funny, so yeah, the series is comical. If metalheads ought to have their own series, this is it. Quoting the band's frontman Nathan Explosion, who suspiciously looks like Peter Steele or Corpsegrinder:

This is the first album by the band. It can be described as death metal with some melodeath elements. I think the album is nothing special if you listen to it without being familiar with the show or the story behind the songs, and that is the reason i enjoy it very much. I love the first season and every song reminds me of the bloodied and hilarious times Dethklok have in there, its entertaing and made me dig the songs very much. I strongly suggest you see the season and then listen to the album. A birthday song, a song that brings up an ancient troll, a song made for underworld sea creatures, a song about how much they hate their fans, an orchestral song, a song about coffee, songs about vikings and goes on. The reason im enjoying this stuff so much is because the show is exrtaordinary.

It is a joke band. You can't be a strict critic when it comes to something like this, they are not trying to prove themselves as great musicians, even though they are. If you compare it with actual death metal bands, it is a bit simple and generic, softer at some times. The drum and vocal work sound simplistic and weak in some parts. The awesomeness lies in the connection with Metalocalypse itself, and that's why the records sell that much and they are so popular. This proves how death metal or extreme metal in general can have good sales, its all a matter of promotion and labels should think about it. It seems like all the comments i did on the album are negative. However, i love it. Parody death metal animated, with songs to be packed in albums, its a good idea and it works.