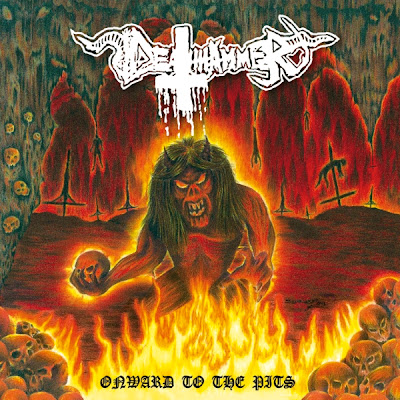 When you see a band logo patched in a Darkthrone cover, you can't help but look for more information about it. Judging from the fact that Darkthrone are slaves of the old school themselves, it is obvious that their suggestions would point to bands that worship that particular sound. Either its old school heavy, or thrash, or black, or anything. Deathhammer are a thrash/black metal band from, surprise surprise, Norway. Active since 2005, they have released some demos, splits, compilations and two full length albums. Under the aegis of Hells Headbangers and Darkthrone recommendations, we are not dealing with a modern melodeath album with too much mediocre cleans.

First of all, i really like the cover art. A concept of a demon dwelling in the flaming depths of hell is appropriate, its not a perfect drawing but it serves its purpose. It somehow describes the music in its own way, it is known that an album is more than the songs themselves. Here's the proof.

Right from the start, skipping any unecessary introductions or preludes, the album takes off like an assault. A fast paced song with vaulting drums indicates the level of raw violence the band is all about, hammering down riffs and screams with no remorse. The album could easily be a major part of the 80s thrash/early black metal scene if it had been released back then. The guitar work reminds a lot of the early black/speed metal Bathory style, influenced by bands like Kreator and early Sodom. Deathhammer is not yet another band that puts some overplayed riffs with repeating drums to create their songs, as many new black/thrash bands do. They are precise and punctilious with their compositions and the flow of the album, not overtrying to put the correct sounds together, mastering the craft of solos perfectly and exactly as it is needed here.

They have a good grip of the certain music style and their songwriting skills help them to prove the point. Vicious and straightforward old school thrash metal rooting almost 30 years ago, with a balanced approach to black metal of the same period. Now, the vocalist of the band is remarkable. Mainly a thrash voice, it has that rough black metal sound at some points (again close to early Bathory) and he does not hesitate to throw some really high pitched falsetto words around. One can listen to some clean screams here and there, reaching an ear drilling octave. Lyrically, the poetry stinks of cemeteries, death, evil, hell, sorcery and all of the above combined. Standout tracks for me are "Lead Us In Hell", "Deathrashing Sacrifice", "Fullmoon Sorcery", "Arms of Death". All i can say is that this album is pure 80s metal madness that could be used to kill posers and nu-metal kids.