Annotations Of An Autopsy - The Reign Of Darkness (2010) 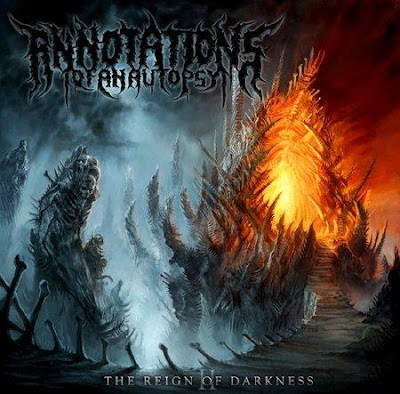 Annotations Of An Autopsy "The Reign Of Darkness"
Winter 2010, Nuclear Blast


Another band raised by Siege of Amida and then taken by Nuclear Blast. They have changed style with almost each release, and this one is closer to death metal, the reason i like it more than the rest of their albums (deathcore in 2007-2008, hardcore in 2011).

Erik Rutan from Hate Eternal participates in this album, so i knew it could not go wrong, the result is a solid death metal album to be listened over and over.

I read on their FB recently, that they are doing some more live shows and then they will disband, im not feeling that bad anyway since the path of hardcore they followed makes me sick. Will keep this as a strong DM punch though.

Facebook
By VJ-atyc at October 20, 2012
Email ThisBlogThis!Share to TwitterShare to FacebookShare to Pinterest
Labels: Death Metal, Table A