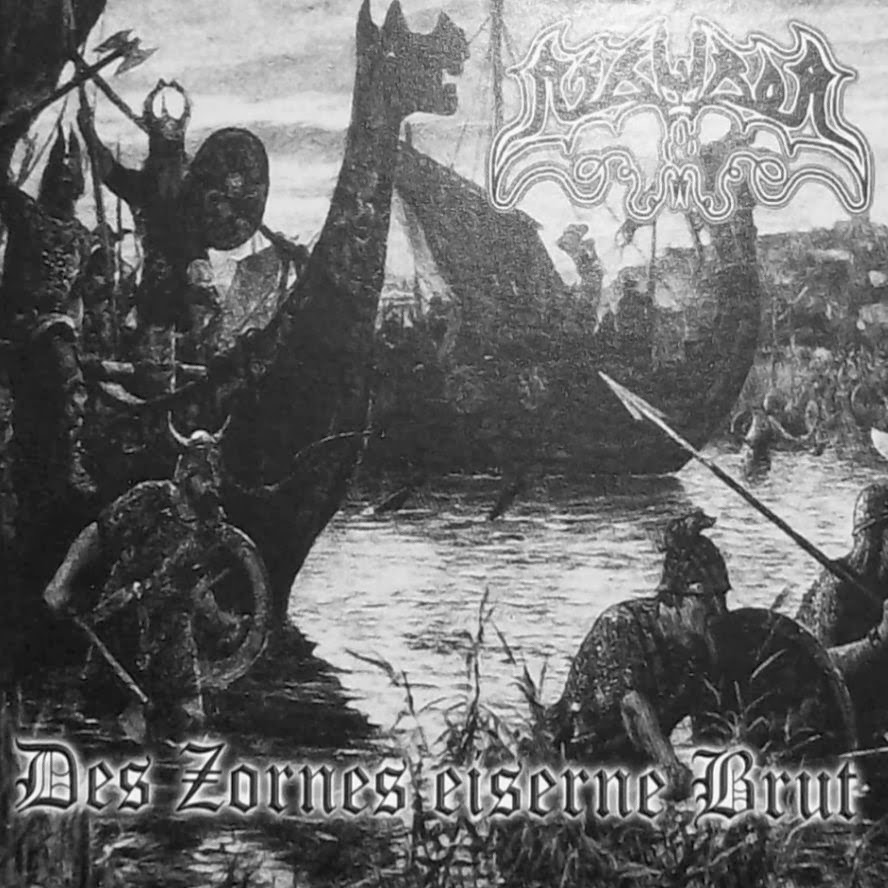 I first met Askuror with their 2005 split release (here's a link) and they are one of these obscure findings you encounter now and then in black metal, when you're not so sure about how it arrived in your hands after all. I did not know of their activities until I run onto this album not while ago, which is their first ever full length album, twelve years after their birth. I did not have high expectations but just wanted to listen to it, because of the familiarity I had with the band.

Askuror present their German rites not only with the album title, but also with the titles of the songs, which are all in German and not German / English, as they used in their past releases. Des Zornes Eiserne Brut means "The Wrath of Iron Brood" and it contains four tracks, each one lasting around six or seven minutes. The total running time of the album goes a little below half an hour and it's fairly enough to display the musical approach of the band, which is safe, steady and moderate as a whole. The band maintains a certain kind of chilling atmosphere throughout the songs and keeps it like that, without overtrying or experimenting at parts.

The whole album revolves a lot around depressive black characteristics, without actually embracing them so that one would call them a DSBM band. Think of a band similar to Kaltetod but a bit inferior to it, caressing both atmospheric and raw black at the same time, while heavily depending on the fuzzy and cold sound of the guitars and and the howling vocals. Looking into it's compositional strength closely, one will stumble upon simplistic, easy to write parts, not having that much of depth or innovation. The drums follow an ordinary playing and they don't make a huge difference to the feeling of the album, as the overbuzzed sound of the guitars, aiming for a sense of isolation and despair, are betrayed by the weak riffs and melodies of the songs.

Aske controls the vocal post in the band and I somehow enjoyed his vocals on Des Zornes Eiserne Brut. He goes with wolfish shrieks, used in atmospheric and depressive black a lot, indistinguishable and painful at all times, lacking variety but keeping a legit level. They're not exactly stomach screams or screaming sheep ones either, but something between, focusing on being as agonizing as possible. Even though his tongue has power, with the proper instrumentation I believe it would have a stronger impact to the listener than it does now, if it does any.

From the first minutes of the first song, I had issues with the production. The band has added a horn in various moments of the tracks, but it it has a watered down, splashed sound that ruins the result a bit, which makes it look like noise or defect. There is practically no bass anywhere, except a second or two, while the drums are too low in volume to be listened at all. You can only listen to the high hats clearly and nothing else from the kit has a decent sound, ensuing a bothersome tone and strongly effecting the overall hype. The album is generally slow, apart from a couple of more agressive black metal moments, which are  also restricted by the damaged mixing and mastering.

As a whole, I was disappointed by the new album by Askuror, even though they are a mediocre band anyway. It is poorly written, limited in variety and ideas and has serious problems with the production and the provided sound. I'm not sure at all if four songs was a good choice for a full length, as this would be ideal for an EP and not a full album as they labeled it. I can't say that this will appeal to anyone outside the genre, or even inside it and it's not something I would suggest you check.