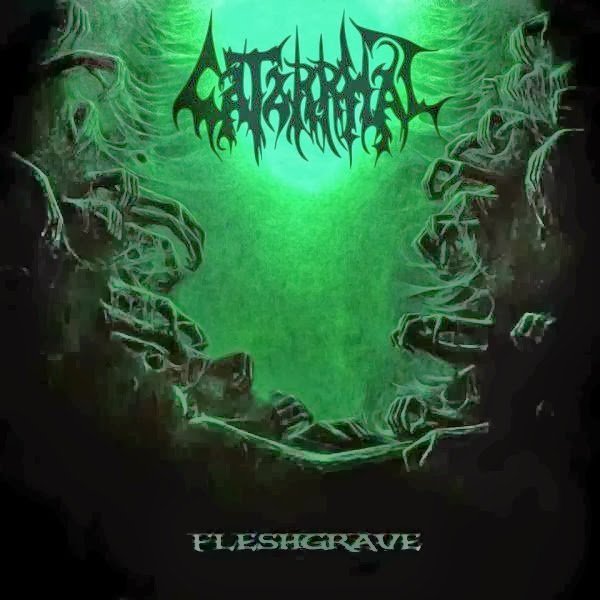 Apart from Aborted and Enthroned, not many Belgian bands come to mind as I speak and I'm not thruthfully sure of what's going on with metal at that northern country, located just below England and near France. From that aspect, I'm always keen in a lesser known and lively band of almost any genre, like these guys Catarrhal, who have been active for more than ten years now. The band focuses on a time-honored pattern of death metal, bastardized with sparse, eerie melodies and very few elements of grindcore, the last not really difining their music.

Fleshgrave is the second full length album by the act, a follow up of their now seven year old debut Putressence, which was unleashed in 2007 on the same label as the one that promotes this one. The record contains ten tracks that climb up  to fourty one minutes in length, mirroring a conscientious and veracious attitude, directed to all the fans of traditional extremity alike. It does not lack originality and it's barely a copycat album, for I noticed several nice textures in it's miscellaneous parts and I can't say I disapproved them at all.

The production of the album is fairly muddy, creating a foul atmosphere that rarely comes up in straightforward death metal albums. I would prefer if it was a little more dynamic (scoring a DR5), something that has mostly damaged the drums in this particular case. Apart from their technical regularity, they sound a bit trampled and daunted, not achieving much as a signficant part of the instrumentation. Apart from that, the essence of the sound is right on the spot and very pleasing, assuring a solid outcome that fits the underground scene very much.

There are not many variations in the vocal delivery of Serge Massin, who uses the natural, brutal growls for every note in the album. As direct the album was, he furthemore avoids any clean singing or high pitched screams and his work is pretty good too. His vocals reminded me of a mixture between nineties Benton and Mullen, striving for the same kind of sound and angryness. Apart from that, I loved the bass sound in the album, which is finally given enough space. Sometimes it's not an outsider in the music at all, stepping forward into the stage to demonstrate it's beauty.

What I appreciated the most in the record was the guitar work. It's not fancy or complicated, as if the guitarists were trying to prove how good shredders they are during the recording sessions, while it's not disgustingly convenient either. The album is filled with authentic, cutting riffs, awesome fills and adequate solos that appear often, sometimes more than once in the same track. When the band attempts to get more melodic, it does not disregard it's original brutality and therefore, Fleshgrave is a heavy album from start to finish. More specifically, I liked "Disinter" for that reason (and the wonderful and crystal clear bass line), as well as the self-titled "Fleshgrave", which has a fascinating intro melody.

I was not aware of Catarrhal before and I must say I'm a bit into them after this album. There are solid ideas in Fleshgrave and even though it does not have what it needs to be a standout album or a year's highlight, it's pretty legit and enjoyable in overall. The guys have as much talent and appetite as they need to create good death metal and their excitement can be felt at moments, bringing some modest, probably unheard material, to suggest to your old school metal friends.