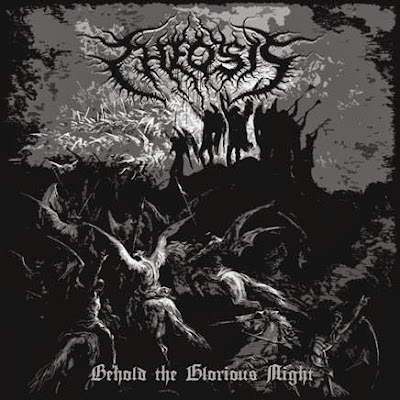 Theosis is one of the projects led by Astraeos, the Greek musician also behind Mortuus Sum, Vetusmora and Morbid Fog. When the last called it quits earlier this year, I guess his attention was focused on his other projects, all revolved around primitive black metal with a few epic / pagan elements. This is the third release of Theosis this year, since there are already two official demos out, behind this final full length entitled Behold the Glorious Night. The band attempts to worship the obscure bands of the nineties (Vlad Tepes, Moonblood and the likes) with a truthful but average record.

Containing eight tracks (from which one is a Satanic Warmaster cover), the album climbs up to thirty eight minutes in length, more than enough for one to form an opinion about Theosis. A couple of one song demos are definitely not enough but as I got my hands on this, I knew what to expect. The cover art and the song titles as well as the lyrics come directly from the heart of the old school, authentic brand of the genre. Therefore, it shall be a tempting record for any closet brat, who hunts down such underground artifacts within a minute of recognition.

Behold the Glorious Night should only be experienced by the fans of the scene, people who know their way around the genre and have certain standards and likes. The atmosphere of the underground during the second wave is present here, with every composition depending on a few guitar riffs. Seldom are there changes after the introduction and the record keeps rolling at it's own rhythm, not overtrying or overproducing. Sadly, this does not turn very well for the result as a whole, because it seems like nothing more than a comfortable, time approved and repeated effort of older bands.

The production is murky equivocal, deliberately channeled to sound like something of the earlier years. Creating such a sound for the band is no innovation to the genre and if you choose to do it, know that we have listened to it like a thousand times so far so the music must have something really special in order to select it out from a load of other records. I don't think there is any special ingredient in this one though and that's why it will scarcely reach mediocrity to the judgement of an exacting listener. There is no doubt that it will affect many die hard fans that can be satisfied with anything similar to their beloved, dusty sound (and I am partly one of them) but that's it, really.

The first tracks didn't move me at all. There is this church organ / synth made introduction "Celestial Grace" which opens the record nicely, but when the first song "Rise of the Black Legions" kicks in, the instability is obvious. There are two main riffs in the whole song with a few melodies above them here and there, and I assure you that you that these thoughts will come to your mind: "Oh, isn't this the other band I was looking the other day, coming from Kvltland with only a few demos during 1991-1993?" or "Yeah, I wrote this riff as well the other day when I was randomly jamming with my guitar". The first song sounds like a filler and that's not good at all. "Drink His Blood from the Cup of Immortality" is the best track of the album. It has a nice churchlike chant in the beginning and then strikes with a nice and horrendous main part.

"Behold the Glorious Night" sounds like a mixture between early Norwegian / Swedish black metal, as if members from Emperor and Throne of Ahaz gathered for a one-night rehearsal. Again, there is one main riff, which is pleasant enough, even though it's strangely familiar. There are two songs "Blessed be the Black Moon" and "I Invoke the Forces of Darkness" that offer very few to the whole idea, while "Under the Spell of Thy Lord" has a melodic and epic part that reminds of epic black metal and more into early Summoning. Hardly a highlight but still worth mentionable.

Throughout the album, I could not make my mind whether I like the vocals or not. At some points, they seemed really sharp and rigid, and then as if it breaks, it fades out and loses it's power. To me, it's a mere imitation of other black metal singers (I thought of Ihsahn in more than half the songs), mostly indifferent if you exclude a couple of good moments. As a whole, Behold the Glorious Night is one of these lookalike albums. Bands should stop releasing stuff trying to get close to the music of the classic albums, not in their essence but with copying and pasting their music as it is. This record is a trip around Europe, presenting the sound of other bands, resulting in something typical and faceless. Like every other, you won't remember a thing after it finishes.