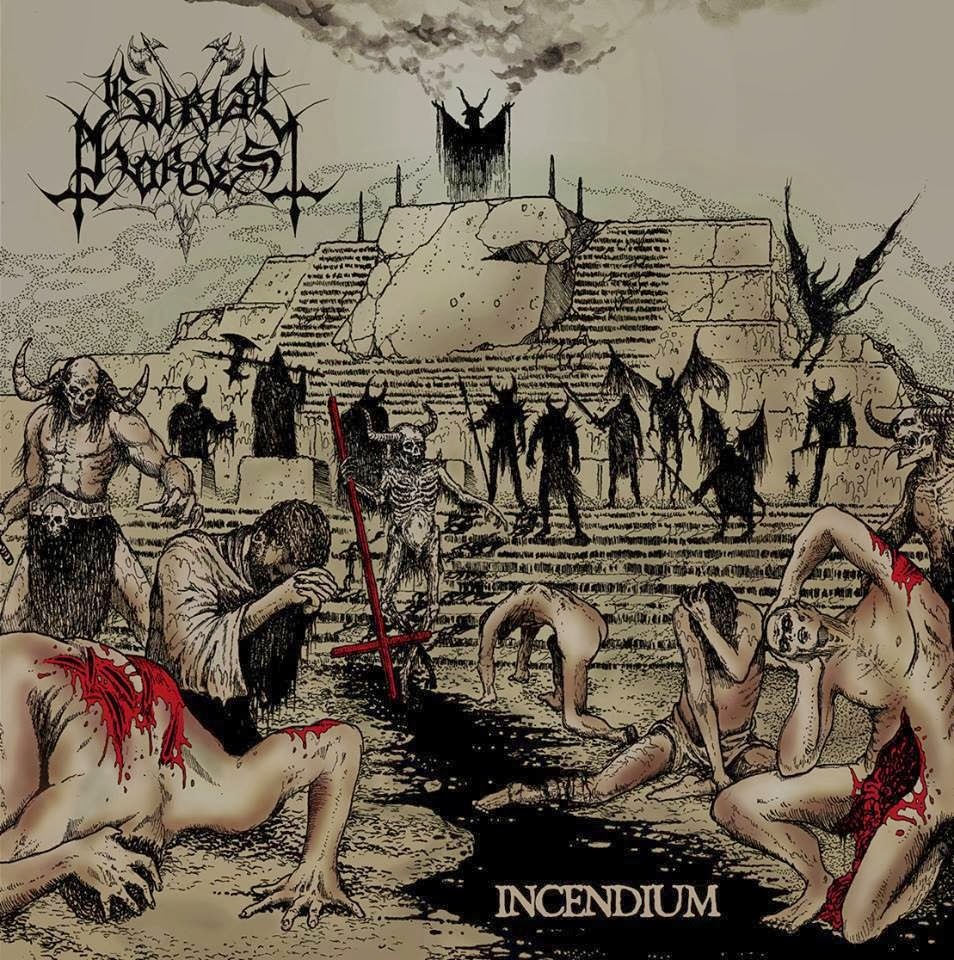 I could not envisage the evolution of this band from their previous material the last eight or nine years, judging mainly from their other two full length albums. They are raw and unforgiving, ravaging upon the familiar patterns of the genre and leaving the expected, used but still welcome impact. However, the last split release with Enshadowed had something to show for the band and with their new album Incendium it's in broad daylight. They have changed their sound into something more orthodox and Scandinavian, adopting a couple of their most classy characteristics that really work any time / any place, if played honestly.

The musical structure of the album does not stray from the path that was hatefully conceived by the legendary, colossal bands of the genre, the ones that I dare not say their name. Powerful and melodic riffing is dominant in every song, very much flourishing from Swedish melody and Deathspell Omega intelligence kind of roots and there is not a single non-intense moment in it's entirety. Apart from the highly toxic guitar lines, the ghoulish vocals are are also skillful and competent, focusing on harsh screams as well as deep growls. For the most part, they differ from the regular and really high pitched screaming of black metal, even though they have the correct tone.

As I already said, the feeling Incendium leans a lot towards northern black metal of the twenty first century, in terms of sound and compositional variety. To that conclusion aids the fact that the mixing and mastering of the album was done at Endarker Studio in Sweden, it seems like more and more bands choose certain locations for their album's editing, we all now the Swedish know the way like the palm of their hand. Since the tracks probably sound like something else you have already heard, I guarantee they don't grow boring any time during the album, as they are still wealthy and well written. As for the drums, they're systematic and accurate, filling the parts with pleasing blasts when needed.

Incendium lasts as much as I enjoy an album in terms of length, which is mostly between forty and forty five minutes. The first three tracks are fast paced and aggressive, except for a part in "Nailed Curse" which is slower brutally painful, such as the parts I really like. There are also middle paced moments like in "Path of Bloodshed" while there is a priest prayer in "Scorned", the longest track in the record. The slow moments of the self-titled track were something I enjoyed quite a lot from the whole album, and the tracks "Abomination and "Black Shrouds of Depravity" contain riffs that remind a lot, maybe a bit more than the rest, of Swedish black metal.

Lastly, this is one hell of an album cover. That baphomet figure at the top of the wretched building and all the demons torturing mortals is really wonderful and people should not ask for anything less than such and associated concepts, we're not in the -take a photo and make it ridiculously black and white to be used as a cover- era anymore. You are neither Transylvanian nor hungry, artistic covers are appreciated and I thank Burial Hordes for that. Incendium is a solid album that gains in entertainment what it lacks in originality, it's respectfully atmospheric and I consider it a step up from what the band had us used with.