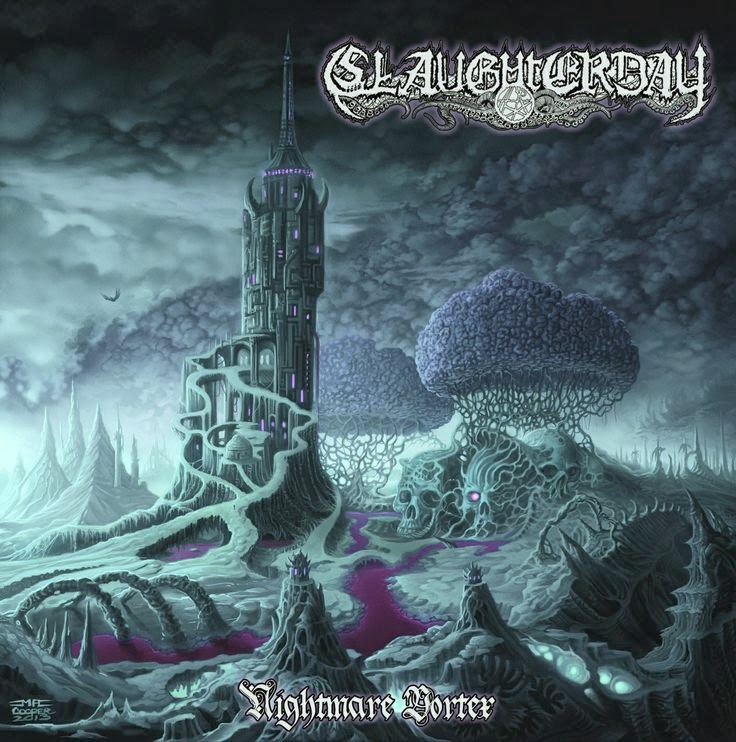 The newborn child of F.D.A. Rekotz stoop up out of nothing and released a first demo, to let the fans know their message comes from the underground and they are not here to play around. That demo had a fair impact on me but not more than a band's obscure debut, short before they disappear, so I chose to wait and see what the Germans would do next, hoping for a record in 2014. They did not fail to surprise me with a full record ready the same year, which was promoted more than enough for a previously unknown band and yet it has the merit is was credited beforehand.

The album welcomes you with this gripping and captivating album cover (done by no other than Mark Cooper), depicting a rotten kingdom in chaos, surrounded by thick clouds and rivers of blood. The details and the combination of blue and red are amazing, providing the record with a wonderful and positive first look. Nightmare Vortex contains eight tracks (plus a limited edition Pentagram cover) and it involves forty minutes of  heavy and straightforward death metal. It's the full outfit, from the art, to the feeling, to the music, to the lyrical themes, everything praises the notion of not being friendly and easy going.

Slaughterday (the weird name must be taken from an Autopsy track, if anyone wondered) come from a place a little souther than the usual suspects in Sweden, but the ground is not unharmed in Germany either, since it's a country that has been trampled again and again by huge metal acts of all subgenres, still suffering brutal quality to this day. I'm not surprised when an adept and brilliant band comes from these lands, especially when they nourish their freshness and creativity, like these guys do. Their music is extremely powerful and it's not looking up to other bigger bands, instead it freely moves around combinations of menacing melodies and it creates a really cool, comforting piece of work.

I'm not saying that Nightmare Vortex is something new entirely, as the common progressions and patterns are often used throughout the album, maintaining a standard structure of fast and middle paced moments. Still, the main content of the album is very well factual and skillful, undergoing series of concrete riffing that is played in a way that it's memorable, personal and unmistakable. You  might as well squeeze your mind a little harder trying to find the exact band(s) that Slaughterday have a strong similarity with and maybe you'll come up with nothing, since they have made a chemical of 10% influences and 90% own inspiration.

Axiomatically, the guitar work in the album is bone-breaking. I can't choose with certainty among these crushing riffs that characterize every single song, with "Nightmare Vortex", "Unearthly Evocation", "Morbid Shroud of Sickness" and "Cult of the Dreaming Dead" being severely barbarous. Of course, the solos in various moments have a certain beauty and destroy in their own way, like in the opening "Unearthly Evocation" and in "Cosmic Horror", while the punishing slow paced part in "Obsessed with the Undead" is an intense twist that can be found in other tracks as well.

There is also a great vocal delivery as well. Over with the groovy rhythms moans a deep, powerful voice that goes from growls to semi growling / shouting at some points, spitting comprehensible words most of the times, so you probably won't have a problem singing along. Take "Addicted to the Grave" (which is definitely among the album's best moments with it's bell sample and a catchy chorus) and follow the lyrics to get an idea. Moreover, the drumming is rather standard but not poor, with lot's of know-how demonstration going on. I don't think Bernd Reiners lacks the voice or the drumming skills.

I could not point out any highlights when it comes to the bass playing, since it doesn't make itself present that much, possibly due to the loud and thick production. Listening to the tracks carefully will let you know that there is a grumpy noise going on behind the guitar sound, but it didn't make a big difference to me and there is not much attention to be spent in that direction, as the awesome distortion melodies will fill any blank spots in the album. This is some well written brutality and has all the potential to get bigger in the near future, if the band doesn't give up for any reason. Nightmare Vortex is everything a death metal fan loves and more, without necessarily relying on a heavy sound or studio atmosphere tricks, but aiming to melt your face from start to finish. It's sound is crystal clear, it's compositions amazing and nothing could possibly go wrong with you partying on this for a long time.