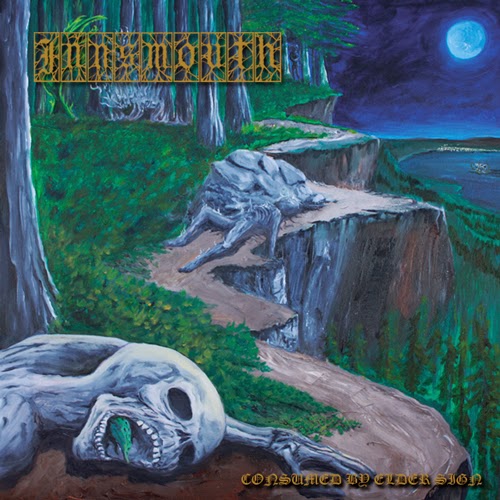 This is an obscure band I found about by listening to their excellent demo The Departure of Shub-Niggurath in 2010, but I didn't know about this album until I saw the label flyer the day it was released. Innsmouth keep a low profile and seem to avoid excessive promotion, since they don't have a personal webpage at all. All the fans can learn about them is through the news of their label, unless they choose to create a digital headquarters some day. Consumed by Elder Sign is the debut full length release by them, containing six tracks and a sum of thirty eight minutes of music and it is a very good starting point, after six years of activity and three solid mini releases.

Their whole musical approach is based on the old-fashioned and cherished sound of the past decade, staying away from a crystal clear and often too loud result. The production of the album constitutes an atmosphere of a time thought to be long dead, it offers a dynamic and sincere sound for the fans of vintage instead of triggered, studio metal. I'm not very strict when it comes to this subject and I'm not crossing out records or approving other just solely from the fidelity, but i surely appreciate one more when I see a high score, especially in new albums. Consumed by Elder Sign has a legit sound and I totally enjoyed it, it's very close to what underground black and death metal bands had during the early nineties.

Despite it's label as death metal, there are sparse elements of black metal in their music, without missing an ounce of doom here and there, all coming from the depths of the nineties of course. Apart from a couple of times, they do not tend to play very fast and they stick on a middle paced rhythm, similar to groove or doom / death metal, like in the opening song "Dead In the Water" or "Thrice Blessed Shub-Niggurath", which is the only track they re-recorded from their first demo. The last one, "Borne By The Winds" contains groovy riffs that fit to the early U.S death metal, even though it has great shrieks and weird reciting vocals. The track "Five Branches Against Doom" is very similar to the Satyricon of Dark Medieval Times - Shadowthrone, and the vocals used there, which are pure black metal typed, are used frequently in the whole album.

For some reason, I kept thinking of Marduk's Dark Endless era, which was close to death metal in terms of the instrumentation, but had high screams instead of growls. Innsmouth go further and add some doom / death lines, along with some child yells and introduction samples, making a remarkable album. In the veins of classic bands, their first effort is delicate and full of entertaining moments, shrouded in a cloak of mysticism that all the metal nerds enjoy the most. It is an unknown band that you might have found first and probably all the people of tradition in metal will enjoy it, go and suggest it to them. DR14 is a rare thing too, one can't really go more decent than that!