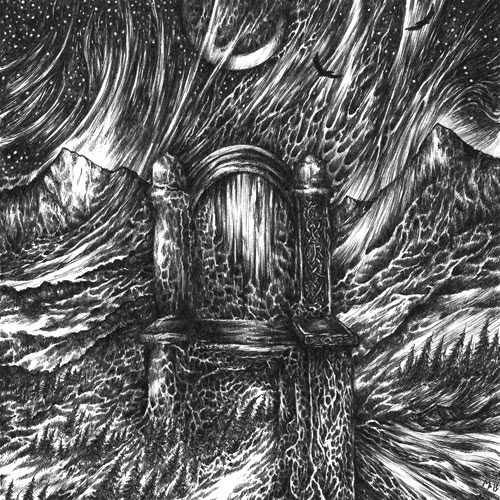 Bands who focus on long, droning compositions, lacking the intensity of pure black metal but boosting on the serene and complacent side of sound, have been under my attention for some time now. Looking for new bands, I was hooked up to the new album by Aurvandil long before it was released or shared, only by looking at the album cover, something that often works as a driving force for me when choosing what to listen. The band had released more than enough mini records before their debut album Yearning in 2011, which defined their heavily atmospheric sound and made their name a little bit more known to the scene. After a legit basis, the band moves on to their sophomore Thrones with hard work and high hopes, from France with love.

These two guys use several components in their music. While the arrangement of the album is mainly established upon a constant switching of epic distorted riffs and gripping acoustic melodies, there are also clean vocal chants and abysmal screams in the tracks, giving a complex but easy to absorb result that goes along the likings of any, i.e. Wodensthrone fan. The lines themselves don't break any new grounds here but they are still alluring for the most part, meddling with a pagan aesthetic that gives the feeling of sounds of the wind in dense forests, never explored by humans before. I recognized the strength of the guitars from their powerful riffs and their thick sound, as well as their major and leading part in the album.

Thrones contains four tracks, and they might be a little longer than what you usually enjoy. Clocking from nine up to eighteen minutes, these compositions will hardly have any effect to fans of more enterprising stuff or other, more combative extreme metal acts. Inside the borders of it's style, the album shall have a good run among the interested. As for me, I can't say it completely met my expectations, because I innocently expected for more action when listening to it's almost full hour of length. The band knows well how to play and present it's material, but I did lose track somewhere in "Summon the Storm" when it felt a little repetitive, a little monotonous, at least stuck to a higher than average level.

What really messed up my experience with the record is the production. First of all, there is a constant and ongoing noise by the time the distortion guitars come in, which probably means their sound was given too much effect and volume in the studio, to an extent that it's not needed and somehow dismaying to listen to. It seems like the producers of the album tried too hard to add a gloomy and lugubrious feeling and they partly succeeded, as it's obvious that the dusty sound was not a mistake but a choice. Yet, it ruined it's organic elements and some of the compositional beauty has been forever taken away. Moreover, once again the drums sound a bit unnatural and often tremble in and out of the track, since they take a step back when the main parts (which have the guitars at full distortion volume) go on. Not to mention that the toms are absent, as if they were never used.

To me, it seems like Aurvandil have what's needed to create a monumental atmospheric black metal album, but limit themselves with overproduction at the studio and use of the same pattern. If the sound of Thrones was cleaner and more dynamic, it would but much more enjoyable for me, despite the fact that I liked a couple of moments inside, and the whole "For Whom Burnest Thou". Anyway, I don't discourage you to listen to this, it more than nothing for you to find out, especially if you are a supporter of this style. This is the threshold of the new year's releases observation for me, as it's the first 2014 record I'm going through! Way to go, stay around.