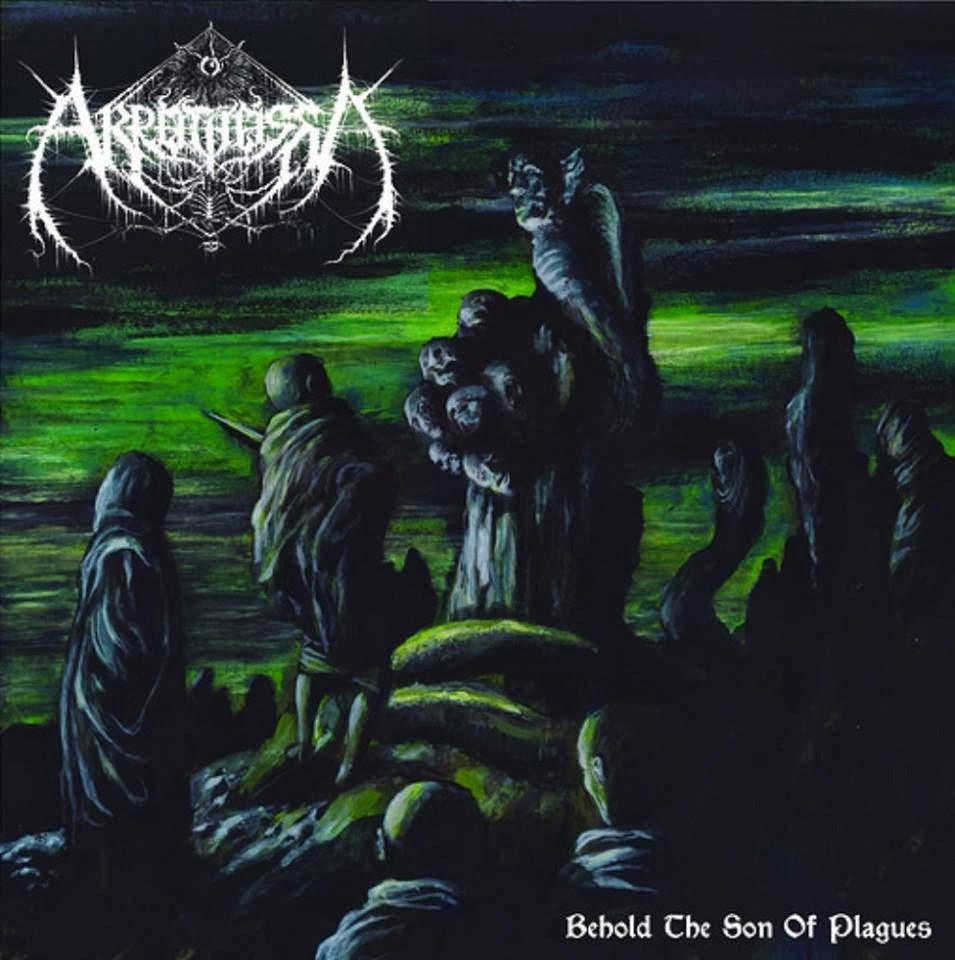 While normally checking for new releases from Greece I found a split of Order of the Ebon Hand with a new to me band named Akrotheism, who had then released nothing but this release and therefore there was only one available song by them. Even though I got into the process of giving it a try for Order of the Ebon Hand, since that was the band I knew and liked, the Akrotheism side won me by far, presenting a really interesting, orthodox thinking black metal track. A newcomer band with members not related to other bands, except one guy that has been to Nethescerial and Aenaon before, is also somehow rare.

With the arrival of their debut full length album Behold the Son of Plagues, it's finally possible to fully experience the band's musical perspective. Akrotheism possess the power of creating dismal chaos, crafting an almost hour long ornament of top notch and straightforward orthodox black metal that deserves a spot among the best albums of Greece. It might be a little early to state that but what I have heard here is effectual and dominant, like a hundred blades sinking into your skin at the same time.

I find it really good that this band focuses on the main metal instrumentation and keeps samples and chanting parts as a second role, unlike many so-called achieving priests of Satan. There is efficient music in Behold the Son of Plagues with a couple of ritualistic ambient moments, nicely put, without stealing more attention than needed from the rest of the piece. As the record is long, they are calm breaks from the distorted intensity that build on it's atmosphere and flow.

I was immediately attracted to the variety of the guitar work here, which contains many poisonous riffs, exactly as they should be done. Drawing influences from Greek and orthodox black metal, this combination is a well oiled machine that serves the purpose of constantly giving out potent lines in an intimidating essence. The record is mostly fast paced with hammering drum playing, only having a couple of slower parts as changes within tracks. Naturally and maybe inevitably, I heard some Deathspell Omega in a few moments, like in the introduction of "Salt of Grace".

While being a first effort, the tracks seem to have the astute ideas of legit modern black metal. They are well written and ideologically heavy, faithful to the spirit of the genre and generally fantastic. As Akrotheism might still be an unknown band, I would speculate that any fan of such bands will really enjoy this to the last bit. Despite being forward-thinking, the band chooses to cover Ved Buens Ende's "To Swarm Deserted Away", which is played in a unique and entertaining way.

I had a good feeling about this by the time I saw it's intriguing cover art and now I know it's remarkable. Greek bands have been releasing some killer albums so far in 2014 (mentioning Aenaon, Hail Spirit Noir and Burial Hordes as examples) and this is yet another come, seemingly coming out of nowhere. Akrotheism serve as a support band in a Ravencult gig nearby and I'm already there, to say the least.