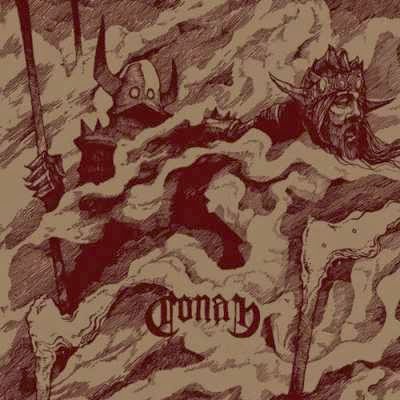 Conan are one British act that slowly grows into a powerhouse for stoner metal these years, setting their mark with Battle in the Swamp EP in 2007 and releasing material since then. Their debut full length album in 2012 a remarkable statement, working on hypnotic, slow music for pill enthusiasts and stoner freaks. Now, Blood Eagle seems efficient and tight at first glance, while the music is nothing less than what's expected of them, through it's fourty four minute length.

This band knows how to take a single note and repetitively make it awesome, focusing on it's bottomless distortion rather than musical variety. They move above the border of stoner rock, into some really heavy sludge / stoner metal location, maybe as heavy as that genre can be if it has to be listenable as well. Listening to Blood Eagle is all about a riff or two, a stomping bass sound, far chanting vocals and a fuzzy atmosphere, while the speed rarely dares to step further than a standard snail pace, only throwing a couple of a little faster moments, like in the tracks "Total Conquest" and "Foehammer".

The job of Conan seems easy but it's not random and really acute. Their songwriting is not extremely crazy and not even extraordinary for the genre, but still it's production and down tuned aggression is what characterizes it's powerful and outstanding sound. What is regurarly loved in stoner will be highly appreciated here as well, like the monotonous drones, the cymbal rides and of course, the guitar melodies. It's all about them in fact, thick as if you need to lay back, relax and enjoy the album.

The durations of the tracks vary from five to nine minutes and lyrically, the band revolves around mythology instead of typical stoner subjects. The lyrics are not that many either, apart from a few words in each track. Yet, the vocals are amazing and appear as much as they are needed (the less vocals / lyrics, the better. Instrumental equals tripping here), comfortably yelling the words from somewhere far away. I'd rather say it's an album for fans only, because it doesn't leave any space for unaware listeners to indulge, when being that... stoner.

To me, Blood Eagle is a notable release by Conan, already being one of my favorite albums in that area. If you're looking for actual heavy music in stoner, these guys fit all the parameters and know how to slowly distort the reality around you into something more colorful and depressed too. The record shows confidence and stability, that's why it's one of the most legit yet. In the name of doom!