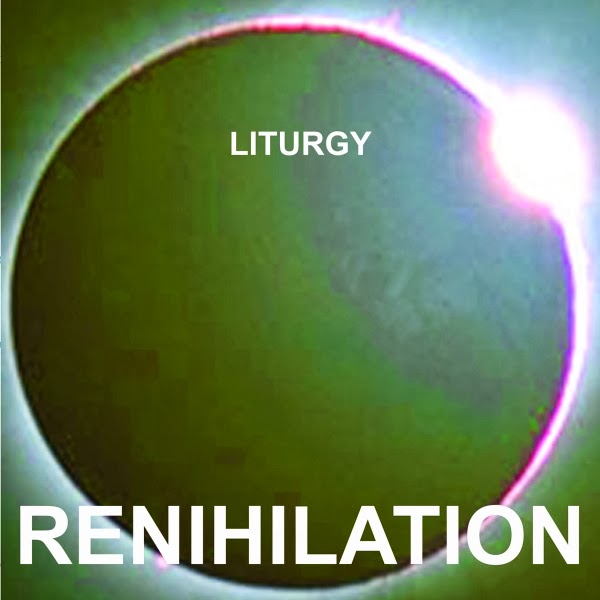 The two sides of the Liturgy coin write "love" and "hatred" as there can't be any possible, middle solution of what a person thinks about them. The American press have been praising them as visionary and groundbreaking, due to their normal lifestyle instead of the misanthropic extremity that is used in the black metal scene. It's really not the time and post to analyze why US ass licking webzines disgustingly promote their own bands, but still Renihilation has, at least and undeniably, a new approach to the genre.

Spare me the indignation when I see everyone get obsessed with bands trying new sounds, as if they're avant-garde, experimental and generally respected. What they seem to neglect is whether the new recipe works, as there are a lot of unusual and shitty bands in the world and there is no reason for us to approve them just because they thought something themselves. The first time you listen to this Liturgy, you will know their sound is their own and you will hardly mistake it for another band, but that doesn't make their music good on itself.

It's not the time to elaborate on the elements of black metal itself and how it's constructed and presented either, maybe I'll do that in another post / article. Even a person relatively new to the genre will know that more than musical characteristics collaborate together in order to build a black metal album. Apart from it's distinctive sound, band can be into black metal ideologically, aesthetically and psychologically. A grand example of this is the bands of the first wave, like Venom or Celtic Frost, don't sound anything like the second wave Norwegians, but all can be put together under the same label, for being "black metal" during their time.

That's exactly what the supporters of this band fail to understand, in my opinion. It's true that Liturgy have adopted some musical elements of black metal and their fast-paced moments are almost half as intense, but there's still lot to be done in order to go closer to it's core. And they will never do. This band will work as a bridge for garage rock fans to embrace the dark side or vise versa, as they don't fit in either place completely and I don't think they care to either. What I don't like about them is that they are regarded as the future of the genre, a fresh and awesome experience, when they are so far away from it.

Musically, there is no way that a person into traditional black metal for some time, would be tricked into this. It superficially sounds like it, with it's fast drums, minimalistic melodies and painful vocals. Under close attention though, this strange and bad alteration of the actual sound is just a poor execution and a travesty. I didn't hear any actual black metal apart from the introduction riff of "Arctica" and the title "Pagan Dawn" (not the song, the title). I heard something else, and that's not a negative issue on it's own. That something else is really boring and staggering though, and that's the negative issue of the album.

What I fail to understand with Renihilation is where everyone finds the power and the passion it has, as to me it doesn't  have it at all. No emotions were triggered while listening to this record, not like anything I have felt with the milestone black metal bands that have changed the course of musical history in their own why. This is like tourists in a foreign archaeological location they don't know about. They read it's history, they find it cool, but really it's just a photo, a souvenir and nothing more for them. Liturgy present something new but extremely inferior to black metal and even cascadian black metal, the scene they seem more to fit in.

The typical comments like "trve freaks hate them because they don't wear corpse paint" are stupid and valid at the same time. The theatrical side of the genre is almost as important as the music and tells a lot about a person's character, so kids in tight jeans and colorful shirts is going to be hated very much by the black metal fans. They wouldn't care about Liturgy if they were an indie rock band, but indie rock hipsters walking up and using the concepts of the genre in a distorted way, talking about progress and other shit, it will feel like a violation. "You're fucking with our traditions, man".

So yeah, in a way, corpse paint is not needed but recommended. Or at least the reasons why it was originally used. Behind the blasting noise, Renihilation musically feels rather positive and easygoing, compared to the misanthropy and hatred other black metal bands provoke, it's not that extreme in the first place. Indie black metal, I would say. And it is awful. Aimless, unplanned and in very bad taste. Their music is limited to the dissonant guitar riffs, miserable vocals and keyboard / clean voice interludes, as they will be written in history books, and not as if they feel to play them. There is no spirit whatsoever.

I know I probably won't change anyone's mind but what I want to state is that there is more beauty in black metal than this. I can't support stupid fonts, dull covers and the illusion of aggression, when it's really more than that. Focusing on the music and declining everything else has caused my negative point of view to this band, as well as their mediocre music on it's own, there's too much talking for nothing here. I don't hate them just because they tried different and ideas. I rather loathe their unstable and erratic playing, along with their failing, pseudo ideology.

"We play, like, transcendental black metal, manifesto..."
BULLSHIT you are, asshole.