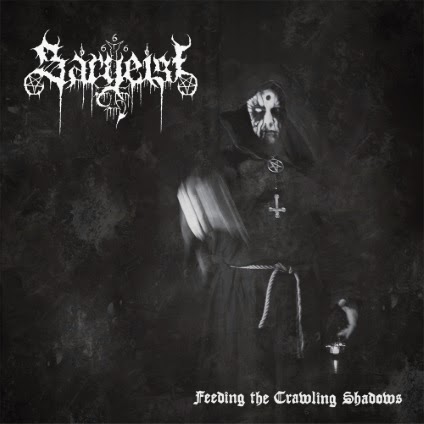 I think Sargeist are at the center of the Finnish black metal scene right now, a scene that constists of a family of bands that share the same, specific sound and often the same members, all of whom like creating and writing for new projects all the time. Here, we come along Shatraug and Hoath Torog again, Behexen's Horns and Vainaja from Horna, guys from the biggest exports of the country in the genre. Four years after the magnificent Let the Devil In, the band returns with another above average album, Feeding the Crawling Shadows.

After listening to it, I don't think I am more impressed than I was with 2010's masterpiece, but still what they offer is the same, practiced mix of epic riffs and and a pure essence. The sound of the album is thick and surrounding, mostly built around fast paced melodies and howling / harsh vocals, very close to what the band has done in the past. Being a straightforward black metal band, it possesses all the basic and needed characteristics, as well as a semi-clean / dusty production, pleasing to the ears of the average fan. They chose not to surprise anyone with yet another album, so whoever knows his way here is welcome.

I would say that the moments of aggression developed above the main ingredient of atmosphere, which makes their sound so distinctive. Feeding the Crawling Shadows is not as angry as Marduk but it's not totally atmospheric either, instead the guys play stinking, melodic riffs, above intense drumming, making it less than "melodic black" but not purely "raw black". There are wonderful guitar moments, like the main riff in "Snares of Impurity" and "Return of the Rats" which is a great example of that phenomenon, creating an dim atmosphere for the band without adding any keys or samples.

The influences of the nowadays Behexen are very obvious and I don't know if influence is a correct word in the first place, when both bands have the same songwritters. In general, I enjoyed the album a lot and it is another offer that doesn't disappoint, proving how good these Finnish dudes are with their craft, totally comfortable to compose together and make something noteworthy. When there are so many strange fusions of black metal with other genres, we're the witnesses of new styles and fresh ideas being promoted via this or a similar sound, Sargeist come with an old-school, nailed punch and hit you in the face. Fresh or rotten.