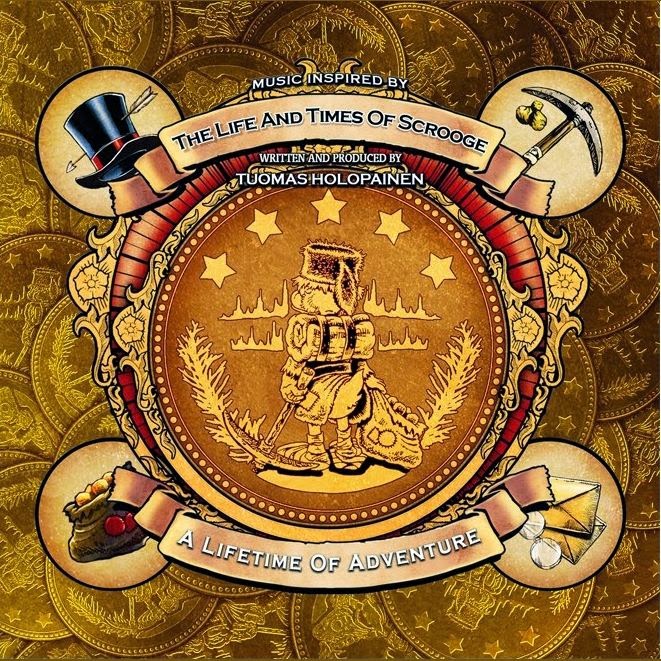 Now, this is a band I never got into and never really liked that much, despite meeting die hard fans from time to time back in school, and occasionally, now. For the very few who don't already know, Tuomas Holopainen is the main songwriter of the popular symphonic metal band Nightwish and this is a project he started, focusing on mellow / atmospheric rock, for the most part. Nothing but this single is available for now, which is a first taste of his debut full length album, scheduled to be released in April.

Under normal circumstances, I would ignore this while browsing and go on to something more into my tastes, without certainly hating on this guy or the band. Nightwish has been the middle ground to step when moving from mainstream rock into heavier sounds for many people and a couple of ultra famous songs of them are kind of acceptable. Why new music though? I decided to listen to this project for it's concept and artwork. In fact, I got very excited only by looking at the cover and reading what it's about. So much, that I don't mind listening to some calm rock for now.

So, the record's title goes as The Life and Times of Scrooge and it will be about Scrooge McDuck, the beloved billionaire who accompanied my childhood even after the "growing up" borderline, alone being one of my happiest memories. As a kid, I can't surely tell how many comic books I have read and it was a big part of my life then, melding into their world as if it was paradise. Also, nothing comes to mind of other bands doing something similar so it was also a happy surprise. And I thought Moby Dick subjects would go as close to my younger years as can be.

As if that wasn't enough, the drawings for the album were done by the godlike Don Rosa, famous for his illustrations in the original comic books very much. If you see the cover of the upcoming album, you will also shit your pants from it's undeniable beauty, especially for fans of the area and so on. I already am into it, without even checking it's material out yet, I know I will be listening to it. If it's anything at least good, I'm going to purchase it too, first chance I get. All that from the artwork only, and screw you.

Not to leave the content completely neglected, A Lifetime of Adventure is a single that has two versions of the self-titled track. It's atmospheric and easy going and it could easily fit to an inspirational  / promotional video of any kind, based on various synths and wonderful, ethereal vocals. As said, I already liked this beforehand, but there's actually a couple of moments in the album that I would anyhow enjoy, it's well written and simply powerful. It goes more and more epic towards it's end, while the lyrics are accurate and fascinating.

Tuomas hit me right in the heart with this. I can't wait till I get my hands on it and this is totally subjective. I will praise this and I want to let you know from now, so relax. I'm probably never going to visit the Nightwish discography for no reason, but this is a piece I will keep close and suggest to my metal / non-metal friends. Very good first signs! And no, I still don't care about the Gus G. new solo album.