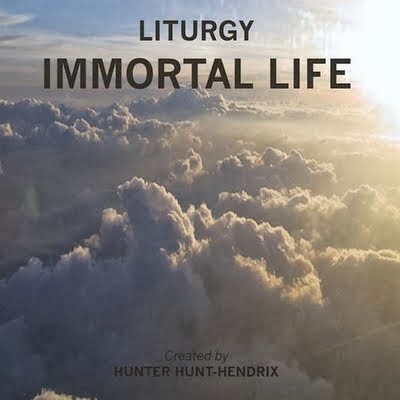 Liturgy might be one of the main reasons why atmospheric / cascadian black metal has been labeled as hipster black metal over the last few years, for the eccentric statements of their frontman named Hunter Hunt Hendrix. While to me, it's definitely one of the most bland bands in that genre, examining their few releases is a challenge and this very first EP was definitely not expected. Apparently, Hunter chose to experiment with amplifier distortions in his debut mini record named Immortal Life, and created one of the most horrible things I have ever heard in my life.

While it's painful listening to this abomination, one can distinguish some repetitive snare hitting behind the extremely thick, computerized guitar noise, which are like sounds of a broken radio or TV. Literally speaking, there is no rhythm, no melody, no structure and no guide in any part of anything here, it seems so pointless and idiotic, anyone a keyboard and a two string guitar could make it. I guess Triple H tried to create something that would fit in the noise scene, but with drum machines and aching guitars, miserably failing in all. Any "guitar riffs" that can be found, and even calling them like that is disrespectful, are atrocious.

This EP doesn't remind at all of the rest of the atmospheric black metal scene and could more or less be something experimental, or mechanical garbage to fit better. The band had not completely formed back then to the sound that it has today, which is at least distinctive. I guess this so called insightful musician decided to put some of the most unpleasing sound effects together, hit any notes at any time during the inconsistent, short and abrupt tracks, in order to compile this awful, truly awful album. It lasts fourteen minutes and they seem like a century.

The only thing that comes to mind after this horrible experience, is that Liturgy didn't become famous with Immortal Life, but with their debut full length Renihilation. Apparently, the deeply ecologist ideas of an indie douchebag are like a bottle mouse trap for the philosophized listeners of the ages 13-18 years old, and really got something off this band. In any case you want to know what Liturgy is about, this is not an example. This is not an example of any music, it should be left behind and forgotten for the good of all of us. Airplane view sunny clouds suck too.