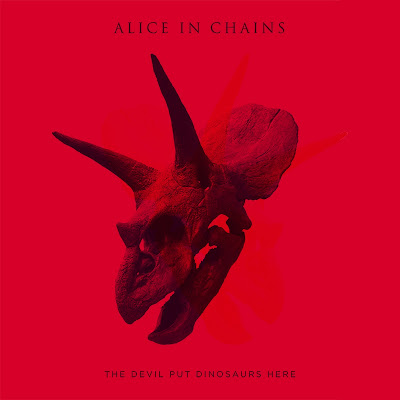 "Black Gives Way To Blue" was a decent album, it might not fill the holes completely, but it had something. The absence of Layne Staley was obvious, but Jerry could still hold their sound together and that new singer seemed talented. Tragic news though, Mike Starr passing away a couple of years ago. Two founding members of the band are now gone. News of another album struck me with an amount of doubt, even though i always give them some space, since they are one of my favourite bands. Sadly, "The Devil Put Dinosaurs Here" does not live up to my expectations, since it barely touches mediocrity.

Maybe its because i generally disapprove the band's decisions and management the late years, they have stepped into the world of mainstream music, they are softer and easy-listening, comparisons with their first years are inevitable. The once depressive angry songs, are now mellow and unimpressive. The record starts with two solid songs that have the groovy slow riffs and the melodic vocals, a classic characteristic of them. A typical AiC fan will enjoy this two songs, as a substitute to the band's good years and a need for new music. From there on though, there are only a couple of songs that worth listening to. It might sound good to a person that has just found out about them, or a person that is into rock artists that promote themselves with video clips on TV, but it huts a little to the fan of the other side. I know a band might change throughout the years and they are free to do so, but this effort is not of their calibre. Five good songs out of twelve is not a good statistic, compared to the masterpieces they have released in the past.

"Phantom Limb" has a catchy intro, and a great build up, the main body is sweet as can be, generally it is a kick ass song. The rest of the songs around it though, are weak and lack emotion. I think that is the main disadvantage of the whole album. It sounds good the first time, everyone's talking nice about it, about how they reproduce grunge, but it really lacks the emotion and power it should have. Im a passionate fan of their first albums not just because they are better albums, they also have that rebellious attitude of teenagers on crack, you can feel they deliver. They are not 18 anymore, progress is natural, right?

In general, im not satisfied with this new album. It seems they have decided to change, im not judging on that and i will stick to the albums i like. AiC of 2013 are a different band, compared to AiC of the early 90s, and it will not be a band i'll be listening to from now on.