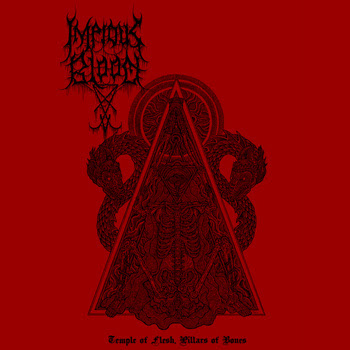 
Im not sure that i know any acts in the black/death metal area from Malaysia, and when i stumbled upon this, i was doubtful. Impious Blood is a one-man project by this guy Blackblood Debauchery of Blasphemy (a ridiculous name, hands down) and this is the debut demo/release by this project of his. I have no clue about this weird label either, no page anywhere, might as well be his own business. Even though the odds were against it, it left me with a really positive impression.

Im very selective when it comes to demo releases and something my eyes are not hooked on something easily, but with such an engaging title as this one, and a blood red artword with a legit logo, i would not miss that. The demo lasts only nine minutes, and it basically consists of two songs, with three very short instrumental tracks (intro, interlude and outro). These three compositions create a little impact, just some random samples put together making something noisy and obscure, and thats about it, since they are not captivating at all. I was glad they flow through quicky, since i found myself waiting for the full songs to start.

From that point on though, the two main compositions of the demo are startling. Very well composed black/death metal with a clear production and an excellent sound to keep it all standing, i instantly appreciated the effort of this guy to produce something decent and be succesful at it. All the instrument lines here are great, from the guitar riffs, to the potent drumming, to the deep growling vocals. It reminded me a bit of Blasphemophager, with a better production and a bit worse musicianship maybe. It tends to follow the unattractive style of Blasphemy/Proclamation but with a tangible improved studio work, and that's what makes it worth listening to. This would be the appropriate band to replace the goofy and witless Von from the United States in 1990, if it had existed back then. Occult, anti-religious, hateful and with the proper music to support it.

The demo is easy to listen and finishes before you even know it. As amazing as the songs are, that much it needs some changes. I would not mind at all if the three istrumentals were completely left out and i don't think you will care any more about them either. Also, i hope the mainman changes name, or just leave it Blackblood, because it sounds, to me, hysterical. I can live with both defects whatsoever and i will be replaying this for some time.
Facebook