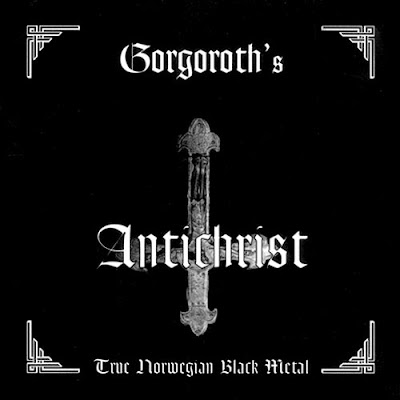 
Two years after a spectcular debut, Gorgoroth unleashed their second full length album, "Antichrist". While it is close to the debut aesthetically, with a simple and similar cover, an obvious satanic subject and the same (short) length, a majority of the scene has mixed feelings about it. Truth is, it is not as groundbreaking as "Pentagram", but its not a waste of time either. With the addition of Frost at the drum post, it certainly worths a close look.
--------------------

Bergtrollets Hevn: A warm welcome to the listener, but not at full potential. There are nice riffs, solid vocals, good melodies, with a dose of epicness in them, but still it does not make the earth move. I have a feeling it is lowered by the production, as a little higher volume at the guitars would stress these nice riffs out more.

Gorgoroth: I was skeptical with this song at first listen, but now i think it is amazing. It starts of with a cold tremolo riff and then goes to a standard melodic rhythm. The whole composition bursts melancholy, and there are clean mournful clean vocals that confirm that as well. It is compositionally excellent, greatly produced with every instrument audible. I don't think the fans back in 1996 were used in a song like that, especially from this band, and that's what shows their talent.

Possessed (By Satan): After a nice trip to morbid melody, here we return to a rawer song that could be a part of "Pentagram" and no one would notice. Its based on simple riffs, it might stick in your head, even though it generally average. I don't like the drums here, they don't seem to feel the empty spots at some points. Towards the end, it gets a bit faster, and its enjoyable.

Heavens Fall: Apart from a shout/yelling and then laughter at the end of this song, it is fully instrumental. A nice demonstration of the ability of Infernus to produce solid black metal riffs, but still it didn't impress me.

Sorg: The longest piece on the album, just about over Gorgoroth. It is significantly slower and depressing, the title itself translates as "Sorrow". Im in for tracks like these but it didn't work as intended here. In the middle of the song, it feels like they were rushing to reach twenty five minutes for the album's length. The beginning with the shrieked vocals, and the end with the cleans and the thunder, are pretty nice.

All in all, i am also one of the people that believe "Antichrist" is not as good as "Pentagram". They did experiment a little, it worked out at some points but didn't at some others. I don't think the whole album is rubbish, since there are a couple of awesome tracks in it, but still it will always be overshadowed by their first release. Im glad i checked this, even for the song Gorgoroth only. It stands among the greatest albums of its time, but it is mediocre compared to them.