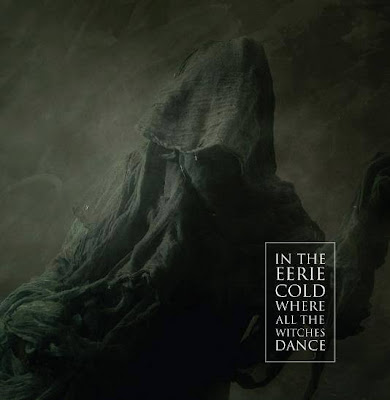 Sweden's Shining have grown very popular in the black metal scene and not only, mainly for the daring live appearances and statements by the band's mastermind Kvarforth now and then, but still he should get props for being an amazing singer and musician. He has proven himself a hard working man, since he does not hesitate to release more albums very often. Mortuary Drape, on the other hand, are a notorious band as well, with several cult releases throughout the years.

These two bands decided to unite their powers for a split release this June, with one song each, creating a record that clocks around thirteen minutes.  Naturally, several versions of 7" vinyls have been released already.

Shining open the record with the song Sensommar, which undulates to the recent sound of their last 2-3 albums, crystal clear and spiteful at the same time. A slow, miserable introduction starts and is followed by whispering/yelling screams, almost acapella, since the instruments behind the voice are elusory at the time. The second half of the song is faster, it has some more guitar melodies generally more energetic. After a beautiful solo, the silence takes control again. It is not the best thing Shining have offered and they are capable of more than that, for sure.

The second song by Mortuary Drape, has an obscure and noisy ambient intro. It prepares the ground for what is to come, almost making the air thicker. An amazing clean guitar riff and then chaos. It does not have the 90s rotten production that they previously had and the sound is improved, even though i sense this might dazzle part of their fans. I don't think they will be disappointed after they listen to it though. It is a fast song, almost approaching the grounds of black/thrash, with nice riffs and again, a solid solo. I like the fact that the bass is not buried under everything, as it happens in numerous bands.

Even if i generally enjoy Shining more than Mortuary Drape, i got the opposite impression with this split. What we have is an average Shining song and a cool Mortuary Drape song, putting the latter a little bit over the first.