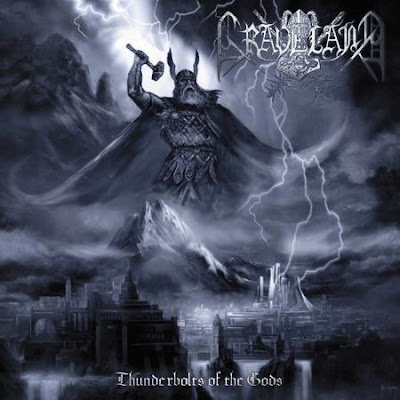 Graveland "Thunderbolts of the Gods"
Summer 2013, No Colours Records

Graveland have walked away from the raw black metal path they used to follow back in the mid nineties, with a sound more towards pagan/viking metal nowadays. To be sincere, i have not listened to a single record by them after "Creed of Iron" but after seeing this hysterical trailer, i decided to listen to the new album. I kept in mind that disappointment is possible.

To begin with, the length of the songs is the regular Graveland usually pulls out, moving around 7 and 9 minutes, putting the album at a convenient total time of 42 minutes as a whole. The music is based on the atmosphere so there is no rush needed, he takes his time to present each piece with patience. As for the cover, it is artistic and as pagan as it should be.

I can't say Darken has improved his skills on the guitar or drums, but he can sure compose great epic metal, that's what this album is all about. As for the vocals, i naturally prefer the hollow screams of his first albums and not the gargling burps he does now, still i was not turned off by them. In fact, i think they fit better with this new style of mid-paced calm music he plays. Even if it seems like he boosts up the speed at some points, he really isn't. The production of the album is satisfying, in terms of the sounding purity, no instruments were left out.

A major element of the album is the keyboards. It brings up the ancient times that Darken is so nostalgic for and it adds a great flavor to the songs. Anything, from synths to chanting vocals, is used here very carefully to colour the otherwise dim compositions of the album. He has always been using keys for his albums from the early days, but now they are given more attention since its not straight forward black metal anymore. Its not as hateful and sharp as i remember either, he focuses more on a pure worship of paganism. There is a somehow wailful composition named "Chambers of Wicked Tears" that depicts this change, which is an amazing song as well.

This album is also full of gorgeous riffs, with efficient melody and old school grimness, combined with the synths and the vocals. Look out for the guitar lines in the second half of "Wolf on the North", in the middle of "Red Polaris" and in "Possessed by Steel". They are not hard to play, and solely not innovative, but as a whole they create an awesome vibe and atmosphere of a different time, it succeeds in creating the appropriate feelings as it was meant to create. There is a profound consistency in each track of the album, meaning that it has no weak spots or vulnerable moments.

There is always an ideological background that holds Graveland albums together and fuels them with inspiration. Even though his appearance and photos are theatrical to the unaware viewer (theatrical used with a negative meaning), he has not changed his views since he first started and he pretty much keeps his own way. The music itself, at least for this album, is interesting.