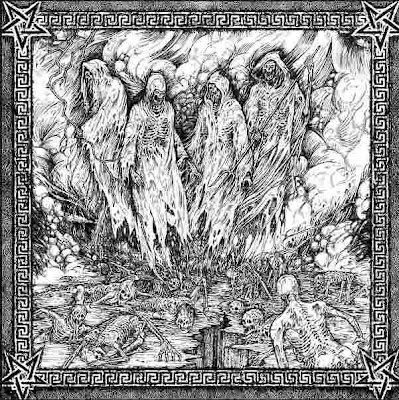 Emmisaries of A Profane Advent
Autumn 2012, Hammer of Hate Records

This 4-way split contains four acts from the greek extreme metal scene, all of them popular in the country. Kawir, a black metal band with heavy pagan influences about our ancient culture, Nergal, the blacksters with mainly satanic content, the blasphemous Embrace of Thorns, and a death metal band named Soulskinner, whose founding member is Gothmog (also known from Thou Art Lord). From the looks of it, it seems like a nice collaboration.

It starts off perfectly and my day is made with Kawir. They have their way with epic and melodic black metal riffs, a great production and amazing vocals. The song is fast paced and reminds heavily of the nineties. The pagan/folk element is present only at the end of the song with an acoustic part. As we continue, Nergal's "Flegethon" comes in. And here's the surprise. Nergal are generally raw and direct, but this is an ambient track. Not a simply ambient track that would fit in a black metal record, it is extremely romantic and emotional (the bad way). It almost sounds like the soundtrack of a mediocre love movie with an ultra perfect ending that makes you wanna puke. I was not sure if i was listening to the same split anymore. This was my main motivation to write a review, just to state, Nergal, dudes what the fuck are you doing?

As i later accidentaly realised, there was an announcement by the label and the band both. A mistake occured and that instrumental track is not Nergal's, but something else, random. They probably were releasing Barbie of Swan Lake the same day and confused the tracks during the printing process, but anyway... There are a few copies left and there won't be reprinted, so if you wanna grab this, avoid the second track. Whatever it is. We continue Nergal-less.

After the funny shock, Embrace of Thorns are the ones with the burden to bring back the darkness, and they sure do. A song as good as Kawir's, fast and heavy, intolerant and with a kick ass title. I cannot ask for more from this band, and they repay for themselves and Nergal at the same time. As the last song of the split starts, it has the scourging sound i approve, and its also fast-paced, which is something good. In the middle of the song though, they slow down and start some random riffs, which is disappointing. I also didn't like that they use the samples of Charles Manson interviews about killing and death. Enough with him guys. Focus on the music please. I also like listening to his interviews, but not his words in every band that can't actually bring up something musically listenable. (Aborted excluded)

As a whole, the split is just a little above average. Two of the bands gave their best self. Soulskinner's song was nothing important, and Nergal's effort was literally nothing. Its not the fault of the band or the other bands, but it sure hurts the whole effort. All the points go to Kawir and Embrace of Thorns.