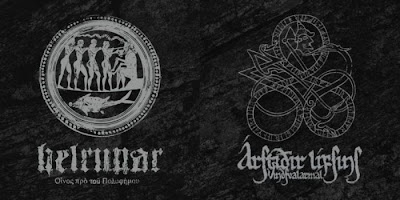 Helrunar and Árstíðir Lífsins not only share a common member, the singer, but also recount stories and events of similar themes, like nature, paganism and mythology. It has been a couple of years since we have last heard of each band, so a new anything is pleasing, let alone a split that contains new material from both bands. The release is also a collaboration between each band's label, Ván Records and Prophecy Productions. These labels are selective when it comes to band signing and that is the reason they only have amazing bands in their rosters.

The music of an album is not the only aspect that describes its quality, especially in metal, thats why most of the fans seek the ideology or concept of the bands they like and never stay for the music and only. As the title explains, this split is indeed a mythological excavation, that makes it even more beautiful, when one knows what the bands are referring to. The artists here have taken a small bit of the Greek and Scandinavian mythology and recite it in their own unique way. I was already familiar with the Greek tale (we have been taught the specific story at school) but had to search for the other one, which was also notably interesting.

Helrunar's subject is a part of the Homeric Tales, two capacious poems called "Odyssey" and "Iliad", counting 12221 and 15692 lines each, respectively. The specific incident they describe here is taken from Odyssey, which describes the journey of the hero Odysseus as he tries to return home, but faces all kinds of obstacles, since he is hated by the Gods for some of his past actions. At that point, he is trapped in a cave of an one-eyed giant with his crewmates, that keeps them there and eats one every day. Odysseus decides to offer wine to the giant, he drinks it and loves it. A while after, he is dazed by the sweet nectar and falls asleep, and then he is pierced through his only eye with a giant spear. He wakes up screaming and blind, Odysseus and the rest of the party grab the giant's sheep and stay under them while they move out of the cave, and that's how they escape. The giant's name was Cyclops or Polyphemus and the song title can be translated as "Wine for Polyphemus".

Árstíðir Lífsins take us to a different time and different location, way norther to Scandinavia. Their musical composition is strongly influenced by a poem called "Vafþrúðnismál" (and i have no idea how to pronounce it), part of a collection of Old Norse poems with the name "The Poetic Edda". In that poem, Odin asks Frigg whether to go at Vafþrúðnir's hall or not, and he is adviced against the idea, since Vafþrúðnir is a very fierce giant. Despite that, Odin heads for the hall and there plays the game of wisdom contest with the giant, which ends up to be a win-or-die competition. In the end, Odin asks a question that only he knows the answer, what did Odin say to Baldr's ear before his placement to the funerary ship. That is when Vafþrúðnir finds out about the identity of his opponent, and admits defeat.

Having read about all these, i went into the music itself. Helrunar hired the greek singer Hildr Valkyrie for additional vocals, specifically the chants that can be heard at the beginning and ending of the song. There is an ode close to the greek rhapsody style with the actual lines of Homer in ancient Greek, even though the band is from Germany, they managed to pronounce the words almost perfectly. After this three minute introduction, there is a mysterious melody with a clean/acoustic guitar, that opens the way to Helrunar's destructive black metal. It explodes with powerful riffs and vocals, fast paced drums and an awesome sound. There is more clean vocal narrating in between the intense moments of the track, that varies melodies throughout its fifteen minute length. Not tiring at all and very well crafted it is, it had me hooked the whole time. It finishes as silently and elegantly as it starts, with the voice of Hildr Valkyrie and pounding waves as a background.

The second and final track by Árstíðir Lífsins lasts nineteen minutes and it is about as flawless as the first. Their lyrics are fully Icelandic, and after a calm intro begins a monologue with deep clean vocals. As it continues, the instruments embrace the voice and lead the way to tremendous screams and howls. The track contains multiple violins, cellos, choirs, keyboards and acoustic moments, as the band consists of many people that commit themselves to each instrument. Transferring the song in its mother language leaves it unspoiled and even though I don’t understand the meaning without translation, it does have its own potent vibe. Due to the variety of instruments and singers, it is more musically enriched than Helrunar’s track, even though both tracks are remarkably good. It closes with a three minute melancholic outro, almost nostalgic of a long forgotten era of swords, magic and paganism. Árstíðir Lífsins have constructed a great atmosphere that is present during the whole synthesis, making it of grand musical merit.

Definitely one of the best albums I’ve heard this year, both for the music and the subject. Helrunar’s approach aimed straight to my heart, for the great story they chose to represent and their support to my country, whereas Árstíðir Lífsins dominated the second part of the listen with one of the most amazing songs of that length that I have heard lately, since Agalloch’s Faustian Echoes. This split is overwhelming.