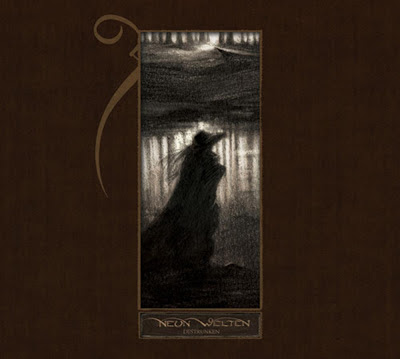 In Ulver's second full length album "Kveldssanger", there is a song called Naturmystikk, which can be translated as mystic nature. They were trying to create an acoustic folk instrumentation of nature itself, and they seem to have inspired many bands since then. Neun Welten is a dark folk/neofolk group that delivers that exact kind of music. From the name (nine worlds of the Nordic mythology) one can understand that their influences and the concept they deal with in the band.

"Destrunken" is the second full length album after 2006 "Vergessene Pfade". The magnificent illustration of the artwork has been drawn by Fursy Teyssier of Les Discrets, an artist i personally adore when it comes to artworks or animated videos. I can't think of a better fitting cover for this album, its warm, serene, a bit grievous, almost describes the music by itself. The whole booklet is based on this worn out brown colour with great drawings around it.

Here, we have a combination of post-rock and the clean parts of atmospheric black metal, executed under a folk aesthetic. Take Agalloch or Ulver, unplug them and add more piano lines, violin, clarinet, harp. I have read in interviews that the guys' first intentions were to make something like the acoustic form of black metal, but as more members joined, they followed a folkloric and melancholic road, it was exactly the feeling i got listening to it. The compositions are well crafted and they provoke a feeling of euphoria and calmness, with a touch of sorrow, which makes it even more artistic and enjoyable. The acoustic guitars create a very warm atmosphere, and they cooperate perfectly with the rest of the instruments in every song. There are also some female/male clean vocals in German, a characteristic i rarely like in songs, that has beaten the odds here, since they are wonderful whatsoever.

Standout tracks for me are Destrunken II, Jarknez and Schein, even though each one is special. If you are fond of tranquil sounds once in a while, give this album a listen with your eyes closed. Nature lovers will appreciate it very much too.