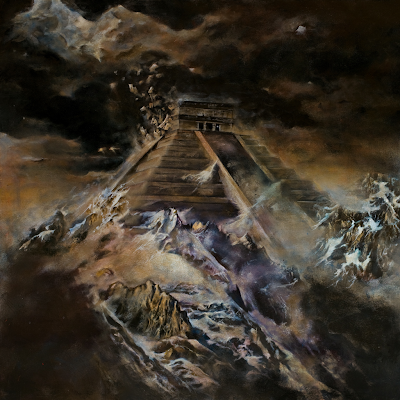 When we're talking about really long album, Elysian Blaze's Blood Geometry should come to mind. This funeral doom/depressive black metal one-man project from Australia released this album last year in two CDs/parts, each one of them lasting around an hour. A monotonous drone is needed in albums like these, but if you decide to listen to this particular album as a whole, prepare to sink in the deepest void.

I am convinced that this is their best album to date. There is finally the perfect balance between the instruments and the guitars, in the first albums the guitar work was a bit unlear and cast aside by the synths. This is not the case here though, a previous flaw has been fixed and Elysian Blaze are even closer to excellence. The atmosphere of the whole album is magnificent, through its variety of synths, gloomy melodies and a sorrowful woe of screams. The whole idea is that the music stays slow, thick and depressive, so i would say its for the fans only. Inside the dark vibe of the whole album, i noticed an ounce of epicness at the end of the first CD in the self-titled track, an elegant ray of light between oblivion.

I personally love the way Mutatiis handles the pianos and the synths behind them. The ambience he creates is remarkable, and that places him among the top artists of funeral doom/depressive black. His music is complex and inspirational, by all means artistic. He is not hesitant to compose long tracks that go up to 36 minutes, a true manifest of pianos, orchestral parts, guitars, percussion and organs. Intriguing instruments are also used here and there, like this somewhat xylophone in the middle of "Pyramid of the Cold Sun". The ambient and black metal parts are close to depressive black metal, in terms of speed and sound, whereas there are groundbreaking funeral doom riffs as well. A surprise might be, that some guitar lines in the album are glorious and shiny, meticulously placed at the correct places, that can tend be uplifting, despite the general despair it provokes.

I didn't give this the attention needed the first time i listened to it and i came back accidentaly, now i can see what a fool i was. It is an amazing album by an amazing band, that will please the fans and not only. It is also one of the best active one-man projects out there, look out.