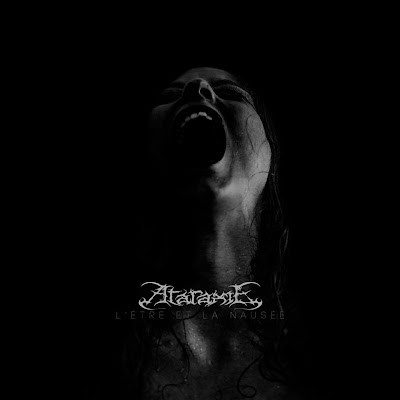 Most of the times, you have to be really patient with funeral doom metal. You also gotta have a trained stomach to appreciate the music, since it’s very unwelcoming towards an unsuspicious listener. It is also dangerous when it comes in touch with mental instability, as the average funeral doom metal band is more serious and damaging than the average i.e. DSBM band. I’m not a die-hard fan of the genre, im very selective and i usually discard most of the stuff i listen to quickly. However, this right here is a really nice album after all.

Ataraxie are French and they have been around since the beginning of the century, counting three full length albums, with this included. They do flirt with doom/death, if they are not completely, and their albums dare to approach the checkpoint of an hour in duration, if not more. As for the band name, ataraxia is a Greek term used by Pyrrho and Epicurus for a lucid state of robust tranquility, characterized by ongoing freedom from distress and worry (go Wiki go). From the cover only, one can be warned and prepared about the content and the music here. Plain black with an edgy logo and a woman screaming, that's definitely music to work your overthinking on. L'Être et la Nausée means something like “Being in Nausea” and it consists of two disks, lasting 38 and 41 minutes each. I knew this band is somewhat popular and i always listen to albums like these, even if i think that i won't like them, but it turned out that i did not waste my time. On the contrary.

The first CD starts with “Procession of the Insane Ones” which is about 20 minutes. There is a clean melody in the beginning and continues with doomy slow riffs, as predictable as that would be, it’s bread and water for the fans of that scene. A nice characteristic that took me by surprise, is that the band is not afraid to increase speed and create fast parts in their songs, as in this one. It alters from clean guitar, to slow distorted and fast parts, as well as a middle paced rhythm in the end, quite heavy, depressing and damn great. The second track “Face The Loss Of Your Sanity” gets to the point from the first second, with a fast paced melody and howling vocals. Throughout its 17 minutes, you can hear many interesting ideas that give such variety to the song that it steps a little further from typical funeral doom, without losing its power whatsoever.  The last piece of the disk is a three minute interlude with sorrowful clean guitar riffs, its slow and relaxing, as if you’re swallowed by a deep black hole and you slowly see the light fade away.

The second CD has two songs, and it welcomes you with a fast, cut-throat, blackmetalish riff. It does not hesitate to drown into slower punishing doom lines again, always executed perfectly. Lasting ten minutes, it could be considered as a bridge between the previous songs and the massive ending track, which clocks about 27 minutes alone. “Nausée” is really long, slow and menacing. The first 20 minutes are the very meaning of funeral doom/death, with some clean parts in between, but mainly with these one-note-a-decade riffs all over it. For a couple of minutes then, it gets some velocity that creates a moment of black metal, before its final, miserable end.

All in all, this is a fine composed album, with a great production, great musicianship and great wretched vocals. If you are a fan of the genre, you should grow into it immediately.