Deathville - No Chance With The Malicious (2011) 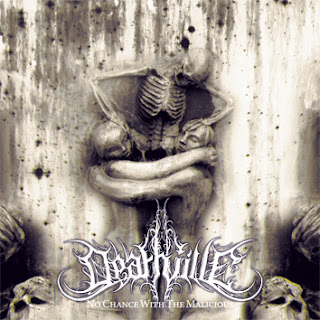 Deathville "No Chance With The Malicious"
Summer 2011, Self Mutilation Services

Another band that i had totally forgotten about remembered because of a new 7" release. Deathville are an Athenian band consisting of two members, both of them with experience in bands like Darkthule and The Shadow Order. Formed in 2010, they are fresh blood to the scene and this full length is their only complete work, released two years ago.

The band's concept revolves around negativity. In the artwork, in the lyrics and the ideology of the bandmembers, that notion is the only motive to keep on going and polluting the earth with "malicious anti-art". Im all for subjects like these, if not really excited about them, but i never stay to that, the music is more important. "No Chance With the Malicious" contains 8 tracks and clocks 37 minutes in total, granting each one with an average length of 4-6 minutes, excluding the intro and one song.

I can't say this is a bad album. It has good ideas, a nice production, great musicianship, its warm and embracing and would surely appeal to any black metal fan. There are both fast and slow parts, with dim melodies and cut-throat riffs at the same time. So, what could bring it down? With a first look/listen, nothing. However, if one examines what's going on here, one will realise that this isn't a great greek black metal album, it is a great norwegian/swedish one. In a way, that the influences have not been a source of inspiration, but the core of the music itself. They have mixed the playing of big and known black metal bands, with almost no alteration at all. I don't always demand originality, but the signs were too obvious here.

The introduction is a 3 minute piece, which does not have any ambient elements in it, as some might imagine. It is a marching song, sets up the mood, does its job as an introduction. The first track "Yvris" has a really good, Norwegian, epic riff in the beginning. With crystal clear sound, it shows about what the whole album is about. Same goes with the fourth song "Puritanical Euphoria", which also has some great guitar melodies, reminding very much of the north. When the album decreases speed, the torturing, lingering parts of bands like Marduk or Shining come to mind, and to that the vocals help a lot. They sound repulsive and horrific, always positively speaking. The self-titled song is a great example of what i just said.

There is a 2 minute track, which is short and fast, and thats all. It has very few changes, its straight forward and agressive, a lot like what Marduk do frequently. Of course, not of that talent, but anyway... Three tracks, "Crime At Late Hours", "These Wounds" and "The Destroyer" sound alike, they start with a middle paced rhythm and then go faster and heavier, with nice but not memorable instrument lines. The album is easy to listen to, i did not have to wonder about the time throughout listening, for two reasons: First, it was a solid recording and effort. Second: I got bored and didn't care a couple of times. So yeah, half and half.

There is nothing new for you to listen in this album. There are tested, guaranteed working stuff, replayed again. If you liked them the first time, it won't change now.