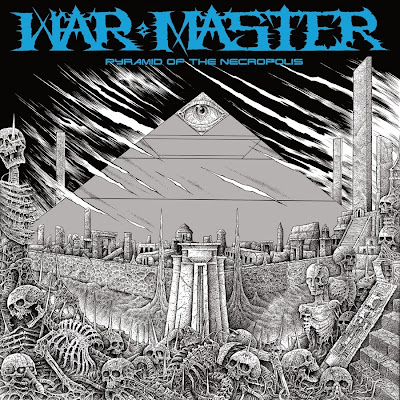 I liked this band's first demo back in 2009 and followed every release by them, until this debut full length. It was really cool to listen to but i didn't get myself to write about it, since i listened to a new song off their upcoming EP this August, and i was blown away again. So, as im waiting for the new shit to arrive, im rewinding "Pyramid of the Necropolis".

When your influences overcome your own creativity, you tend to sound like your favourite band, and that rarely works, to be sincere. Such bands offer nothing new to the scene, they fail to replay old stuff properly and they have an expiration date. However, there are exceptions of some bands that happen to approach the core of balance between originality and influences, creating something that does sound like another band, but still amazing. So, when Entrails release the new Entombed albums, when Thulcandra carve the path Dissection once opened, there War Master are the reincarnation of Bolt Thrower.

The feeling and the vibe of this album is perfect. A kick ass title with a stinking album art welcome the listener with open arms, like they know from the start that its going to be a hell of a ride. There are no introductions, or acoustic parts, or clean vocal moments. As you may presume, its pure death metal all the way. With the correct production that creates a dusty 90s sound, hammering riffs/solos, tremendous deep growls and an excellent drum work. These guys (some members of grindcore freaks Insect Warfare) have the talent and the guts to create brilliant death metal, close to the old sould that many of us miss, without being repetitive or boring. All the compositions are enjoyable, and they are the perfect exercise for the neck.

When an album is so good, you can't even blame it for not being original. I can say that they sound very close to Bolt Thrower, but they are not copycats or lookalikes. Strongly recommended.