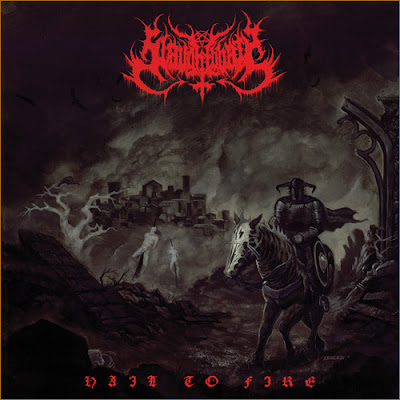 Ok lads. Chile and South America in general, is not famous for its romantic metal acts. In fact, they have their own stench of a scene, from brutal death metal to black metal, with new bands coming out quite often. Slaughtbbath are not newcomers though. I was not familiar with them and this is their debut full length, yet they have been jamming since 2002 with lots of demos/EPs/splits on their backs already.

First of all, if you have seen this release before, you might be wondering what front art is this. Well, its an alternate cover they chose for the vinyl release, and a much better one, if you ask me. Once again, this is a well crafted blasphemic black metal album, for the fans of Embrace of Thorns or Impious Blood, or just anyone that admits Von are worthless compared to the actual bands of their subgenre (no, im not letting it go). They are not bringing up anything new to the table, just improving the characteristics already in use, since the album is significantly better than half of its competitors. The production helps a lot to this conclusion, since it gives power to every instrument, everything is clear and nice, it lacks superficial effect tricks, which is great of course.

I appreciate the fact that they did not use any interludes, intros or outros. It is straightforward, direct and merciless black metal all the way. There are both middle paced and fast paced songs, and the only "quiet" moment of the whole release is a clean intro in the self-titled song, which lasts a little bit under a minute. I really like the dissonant riffs and the growling vocals here, as well as the energetic drumming and audible bass lines. Most of the album is driven by tremolo guitars and blast beats, they're playing in the same pattern again and again, but still they manage to eliminate any signs of boredom with their great riffs, the clean sound and the speed metal solos.

These guys praise the bestial side of the genre and they are doing it well. If you like your bands with a shitload of filth, chains and big metalic wrist bands, goat heads and weapons, this is for you. It should make the day of Black Withery/Archgoat fans. And please, take a moment to check their ordering bundles, since their label Proselytism usually puts out some kick ass packages.