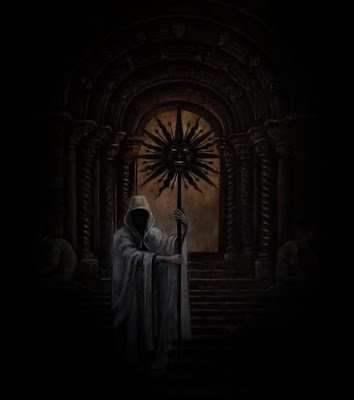 Coming back with a second album two years after their debut, Nightbringer released "Apocalypse Sun", which was highly anticipated at the time. It seems like "Death and the Black Work" worked great for the band's carreer and triggered them to continue, as the fanbase kept growing. I can't see what's so special about their first record, but this one is a notable improvement, by all means. To me, they fully placed themselves among the best bands of USBM and the orthodox scene with this album, which is ferocious and demonic from the start to the finish.

I had a feeling that the production would not let the compositions rise in the first record, and since this one is following the same path, i was correct. The immense musical borders of the band are unfolded with great success here, since the sound is clear and polished. The compositional ideas are not vastly different from the ones on the first but they do have expanded and they are much more enjoyable, as they are distinguishable. The album fails to avoid repetition, but it does create a chaotic atmosphere, which at least helps the band spread their occult message. One that listens to this album will recognize that it roots deeply into the orthodox territory, without having to read about the band's views in the first place, and that means victory for a record. The concept of the album, once again, will not be understood by the average listener because of the lack of knowledge on the subject, and that's why it's important for the music to somehow speak for itself. I'm sure part of the band's fans are trully inspired by these apocalyptic lyrics, and most of them probably peruse on them as well.

Nightbringer have wisely increased the number of tracks and they have divided their work to shorter portions. The album again lasts more than one hour, but it's easier to go through when there are tracks as short as 4 or 5 minutes. I'm glad they decided to move away from the slow pace they had, with additions to several fast songs and parts of songs, as the first two of the album "I Am I" and "Supplication Before the Throne of Tehom" and "Goblet of Sulfur and Poison". There is less ambiance as well -if there is any- and that leaves room to the tracks to create a vibe of their own. The guitars have that unbridled riffing method again and it fits most of the times, except when the album gets sluggish in songs like "Excitium: Litany of the Devouring Earth" and "The Utterance of Kasab'el", which are the weak points of the album. They don't have any major down points on their own, but compared to the delightful variety contained, they are cast aside. The vocal work is deep, painful and interesting. It helps the instruments most of the times, even though some howls are a bit inordinate and cover too much space for their spot. I admire the drums a little bit more as well, despite the fact that their machine-made sound is too obvious in a couple of songs.

All in all, it is a memorable album. When you listen to it for the first time, it feels like you have not consumed 100% of what it has to offer, and it seems one has to shut everything else off to fully appreciate the album. I can't speak for the black metal kvltsters that might be disappointed with the clean sound, which of course is not a negative issue. I did enjoy it more than the first album, but it didn't leave me with the best impression after i was done for half a dozen times. The comparisons with Deathspell Omega can't be avoided, but not in terms of which band is better (no contest) but as an example similar to Nightbringer's music. I can feel the potential and apart from my own taste, which did not fully approve it, i recommend it for the fans.