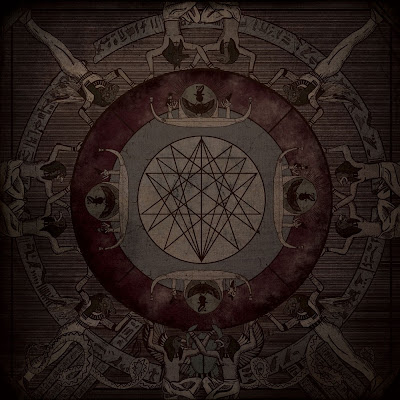 Occult masterminds Dødsengel from Norway meet the infamous Americans Nightbringer to collaborate on a split release under the aegis of Daemon Worship Productions, which is one of the most legit labels in the industry, hands down. It's the only release that both bands have scheduled for this year and a combined ritual of these guys together is an extraordinary event that should not go unnoticed.

Such an album should have artwork of some proper level of artistic merit, and it surely does. In dark brown, there is a sigil with a pentacle-like symbol and drawings of the God Ra all around it, which provides some information about the concept of the release as well. The conceptual background of this split is the esoteric doctrines of the journey of the sun in four courters, to death, to the underworld, to the rebirth and finally its ascent. Did you expect anything less enigmatic?

If you are familiar with Nightbringer's Hierophany of an Open Grave, you probably know what to expect. The first two songs are by them and they are very similar to the full length work of the band, consisting of intense black metal combined with parts of slow and decaying riff melodies. There is a new drummer called Menthor (has also played in bands like Lvcifyre, Corpus Christii and Enthroned) who doesn't miss a hit, if not improving the overall outcome. The production of the band is polished, as it was in the last two full lengths. Nightbringer have assured that there is a ritualistic and noisy introduction in their first song "Watchtower of the West: Gate of the Mighty Dead" so that the listener is welcomed to the claustrophobic oblivion that they will be in for about half an hour.

As Dødsengel kicks in, the differences in the production are apparent. Their sound is thinner and somehow dirtier, even though everything can be heard almost perfectly. They are known for their experimentation and it is a main characteristic of these two songs as well, melding doom metal with black metal, as well as some ritual ambient parts. "Watchtower of the East: Horus Sunflesh" has some shivering riffs and reminds a little bit of Negative Plane, whereas "Watchtower of the South: Drunk Upon Inmost Fire" has a tight intro, some chanting voices in the middle, solid musicianship as well as a meditating aesthetic.  It's more self-reflecting and the longest piece of the split, lasting 12 minutes.

I can't decide which side of the split i prefer and i believe breaking this release into parts would cause it to lose some of it's beauty. It is a multi-sided record with many hidden aspects around it, it can be described as innovative, and i'm positive for that alone. If you are a fan of these bands, check this out, some of their best stuff are acclaimed to be inside here.