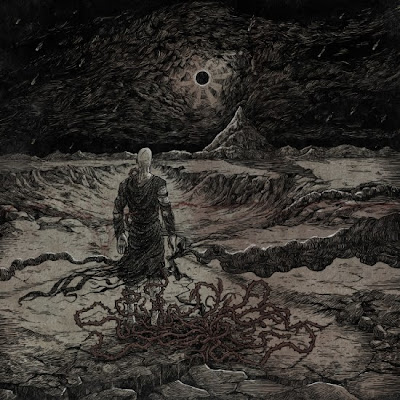 Over the last few years, more and more bands from Iceland that I've been listening to are incredible and even though their metal scene is not big in numbers, it is huge in quality. Carpe Noctem were formed in Reykjavik back in 2005 and eight years later, their debut full length album "In Terra Profugus" is unleashed via Code666 / Aural Music. I have to say that I discovered them with this release, even though they have released a demo and and EP in the past years, and the least I can say, it was a pleasant encounter.

The typical blast-beating, fast-paced riffing and shrieking rumpus of a lot other mediocre black metal bands is amiss here. instead there is a dim, bleak atmosphere that awakes real darkness and claustrophobia. The school of Deathspell Omega has bred a lot of monstrosities, and "In Terra Profugus" will directly grab you and sink you into a thick and colourless soundscape, with no escape until the album is finished. They blend pummeling black metal with dull and gloomy doom/death, as well as ambient-esque clean melodies in a way that the music is droning, stressed and mesmerizing. The flow of the album is perfect and each song is precisely connected to the previous one, giving the impression of one 52 minute long composition, split in five chapters.

Opener "III. Odium Somniferum" starts of with a murky introduction and a doomish, painful part, that explodes into choral dementia in the third minute. Perfectly sculpted, excessive structure, with hellish guttural vocals and compelling riffs, it closes with a heartending melody, along with whispers, that continue to the beginning of "II. Ars Moriendi". It is a discordant track right at the level of the first one, and by now the band's sound is fully established. "I. Vitriol" sets off with a meditating intro, which transforms into the familiar blackness for the middle part of the song, before ending with an equally tormenting delivery. The fourth track "II. Metamorphoses Maleficarum" contains dripping rhythms and sharp, agressive noise, as well as calmer parts with clean guitars and whispering deep vocals whereas "III. Hostis Humani Generis", the longest piece on the album, moves into slow and fast parts, acclaiming the ordeal of the impending end.

Carpe Noctem's music wrings the listener off any energy, submitting them into a total devotion and attention to it's misery. Their propensity to switch between chaotic vehemence to funereal pace, combined with the remarkable musicianship create a nominee for this year's top releases. It is built from the excellent work on the skilled vocals, the tingling guitars, the double bass and the hammering drum lines, reminding a lot of their countrymen Svartidaudi. As much as I enjoyed their "Flesh Cathedral", this one stands besides it as a little brother, a sequel. It is also a conceptual record, revolving around matters of life, the self, death and the hard path towards wisdom, captured into the music as well as the lyrics and the outstanding artwork of Antti Salminen.

Very close to the core of the genre itself, "In Terra Profugus" places itself among the masterpieces of it's period. It's menacing aesthetic and notable content replenish the need of the fans for quality in new releases, it ensures that the band will be under observation, for we shall see their march forward, after this promising debut.