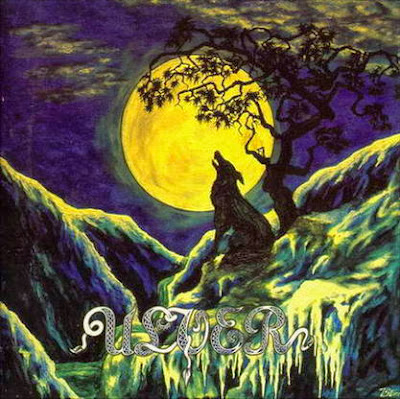 As it seemed that Ulver were moving to a softer and slower style, first with the superb folk black metal album "Bergtatt" and then with the fully acoustic folk "Kveldssanger", I doubt anyone saw this coming back then. The band decided to return to it's original roots (which might not even be that) and release a primitive, raw black metal record equal to Darkthrone in severity. For that reason, it is a pity if this classic album doesn't come up in conversations about the elite Scandinavian extreme metal scene in the 90s, it considered a top album by many. I can't see if it's the album of the decade but it sure is one of the most acebric outcomes from up there in the north.

Before listening to the album, one should be prepared to listen to something with a harsh, dirty production. Expect a lot of fading sounds, hisses, reverbs etc..., while the compositions lack any tricks, stay as traditional and immidiate as possible. Garm has disproved the rumours that Ulver recorded it outdoors in a forest, but still it sounds as if they did not have the money and they did not care to clean any part of the sound, trying to create the madrigal of the night. Today, we thank them for putting this together, an album that can be used as a lighthouse when it comes to describing Norwegian black metal of the second wave. Even though it is close to the albums of it's brother bands, you don't feel as if you have listened to this before, because of the agitating originality that needs time and trained ears to discover. As far as I'm concerned, there are a couple of incredible parts that worth a place among the best black metal of their decade.

It turned out that Garm has a powerful voice that can raise up both heaven and hell, from his deep clean chants to something as scourging as this. This album doesn't contain any clean vocals, only screeches and shrieked wolf howls, totally primeval in their very nature. His agressive screams have grown more bitter than in "Bergtatt" or he just used them is a more bitter way here and it is an essential characteristic of the whole album. Haavard and Aismal were in charge of the guitars and I sincerely didn't expect anything less than an amazing job. Each song contains more than two or three riffs and all of them are amazing, floating between the hated side of Darkthrone and the almost epic side of early Gorgoroth, with a personal Ulver touch. Of course, the majority is built on sharp and fast-paced tremolo melodies. The drumming is based on blast beats and it's mostly covered by the guitars and the bass is almost non-existent, except a small audible piece in the last song Wolf And the Night. In that song, there is an one note sound that reminds of a piano but probably isn't, as well as some notable riffs out of the whole album. Other standout tracks are Wolf and Man, Wolf and Passion.

I think "Nattens Madrigal" is stripped to it's fundamental parts and it's composed in a simple, anti-mainstream way. The production makes it hard to grasp on and still it is highly accepted for it's overall quality. The third and final album of their black metal trilogy before going into digital music, was a worm filled fruit, an awful anthem for the wicked forest people, meant to be worshipped by the fans and hated by the outsiders. One would think that moving to a bigger label as Century Media would turn them into something lighter, but no. The wolves inside man are restless and hungry.

DAMAGE: 9.0/10
By VJ-atyc at September 28, 2013
Email ThisBlogThis!Share to TwitterShare to FacebookShare to Pinterest
Labels: Black Metal, Spectacular, Table U, Ulver