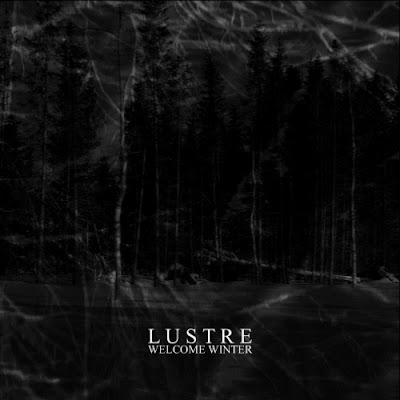 "Welcome Winter" was the first material i ever listened by Lustre, right before their debut full length "Night Spirit". The EP and the album were both released in 2009 with a difference of 7 months, and not much had changed in their music after all. This release seems like a shorter, about half the size, record which keeps the same aesthetic as "Night Spirit" and could easily be contained in it.

The structure of the album is familiar, since there are two tracks named Part 1 and part 2, exactly like in the full length. The only difference this time, is that the total length climbs not higher than 20 minutes, granting the two compositions with 10 minutes each, making the EP significantly shorter and less boring. The music itself is keyboard driven and builds a quiescent atmosphere with the buzzy guitars and the synth melodies, with incomprehensible screaming vocals that sound like strong wind during a freezing night. As the title states, the record is a manifestation of winter, the coldest and most inhospital season of the year.

The first part of the release is one of my favourite Lustre songs, just because i always sink into the introduction melody, which is to me, one of the best Nachtzeit has composed. With slightly more ambient parts and a couple of added changes throughout the song, he has created music exactly as his earlier full album, but just a little richer. The fact that both tracks are shorter avoids the tremendous monotony that was present before, and makes, just a little more pleasant. The role of the drums has been neglected, they are low in volume, more like background beats, similar to the ones of the heart, with seldom any tempo changes.

The second part is of the same weight as the first, with a very nice part during the last two minutes. As thought tangling as the music is, it has a tiny share of hope, driven out from nostalgia and melancholy. If it could depict winter, the listener would be in a warm, wooden house in a forest, nice a stone fireplace, protected from the wrath of nature, instead of being out exposed to it. This EP is the sibling of the first full length "Night Spirit", at the same pace and feeling, challenging the elements with its patience to unfold.