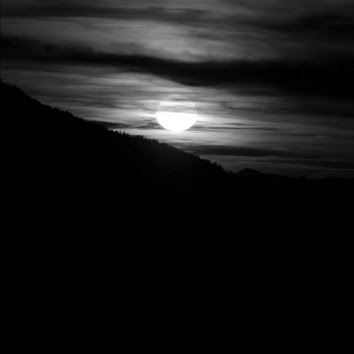 Some years ago, when i was strongly into the DSBM scene with a purpose to find all the decent bands out there, i stumbled upon Lustre, a band that was complimented by the majority of the fans around the genre, and by the time, this was the only full length they had released. It is a project by the Swede Nachtzeit, who has also be involved in Hypothermia, a respectively more famous act.

"Night Spirit" contains two repetitive and monotonous 20 minute tracks, named Part 1 and Part 2. As Lustre focuses heavily on the atmosphere of the album, the tracks are composed with hardly any variations, aiming to wring the listener into the nothingness. Each song consists of regular, slow drumming, a simple riff or two, which goes on for the whole length, a mourning keyboard and some hissing vocals that appear and disappear inside the tracks. A couple of minutes are enough for each song to give you the idea of what's going to be playing for the next 20 minutes so it will probably mean something to the people that admire such a style, like myself. I don't really care about the repetitiveness here, it produces a droning calmness with ounces of despairs via the vocals and it's not difficult to approach, due to the neatness and simplicity of the instrumentation.

The first song starts of with a guitar line that has a hollow sound, creating an awesome background standard. In the frontline of the song lies the keyboard melody, which is funereal, yet hopeful, and pretty much stands out by itself. The screaming whispers of Nachtzeit come along to demonstrate Lustre's music at its full potential, and that lasts about 14 minutes, when a synth-only part comes in and keeps going until the end. The second song has a more "living" riff, which is more distinguishable in a way. These new 20 minutes follow the same pattern as the first part of the album, but i have to say i enjoyed this one a little bit more, because it gripped me more. Despite it's plain and simple playing style, "Night Spirit" has a significant level of uniqueness, which derives from the vocals and the keys in the songs. Monotony is not even a negative factor.

Even though it has the level of sorrow and depression i want in these albums, it didn't fully captivate me and i feel that if i was to listen to the album alone, without anything else to do or think, i would, at some point, get sleepy. Maybe that was what the band was going for anyway and for a first attempt, it is a promising album.