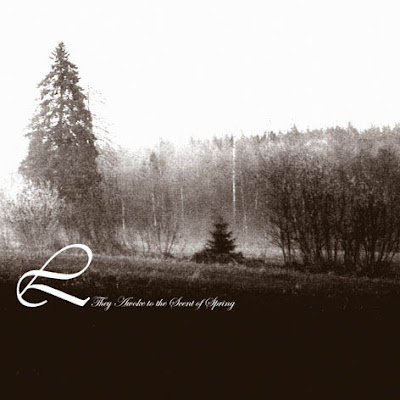 Lustre "The Awoke to the Scent of Spring"
Autumn 2012, De Tenebrarum Principio

This Swedish outfit is a project of Nachtzeit (ex-member of Hypothermia) and it specializes in slow-paced, woeful music, embodied with a natural aura and influenced from the elements themselves. "They Awoke to the Scent of Spring" is the third full length by the band and as I suspected, the music again is tenuous, lacking any extraordinary instruments or tools, and most of all relaxing.

The only characteristic that reminds of anything that has to do with metal here is the vocals. The voice of Nachtzeit sounds like a desperate echo in a vast forest, moves between screaming and whispering and definitely adds to the atmosphere, instead of displaying a kind of difference in any way. Compared to their older records, the vocals have not changed in various ways. Apart from the sound, which is identical, their spot in the album is as it was, distinctively recounting the very few lyrics and mainly standing back from the guitars and the synths to chisel the album's familiar sound. The album is split in four parts and only the first two have lyrics, leaving the last two completely instrumental. The length of the album is also close to what Lustre usually produce, counting 40 minutes of solitude.

One needs to be on a certain state of mind to follow the album without getting frustrated or falling asleep, since it is monotonous and minimalistic in a way that nothing resounding happens while it's playing. The slow tempo and the sparse variations might work for some to sink into the dreary musical journey that Lustre is, while at the same time, might as well disappoint and bother others, who prefer more activity and energy in their music.

Part 1 and Part 2 can be described as the solite hypnotic black metal that Nachtzeit composes and they are similar to their earlier albums, especially in "A Glimpse of Glory". Consisting of distant vocals and very few drums, synths and pianos, they do create an atmosphere of nostalgia and awe to the magnificence of nature, but still they do not surpass what the band has already released. There are fewer samples and a bit more key usage in this side of the album. Part 3 and Part 4 are quite different, as in Part 3 one can hear the sad melodies of a non-distorted and non-fuzzy guitar, along with the synth in the background. The whole track has a repetitive guitar and synth line, with simple drumming added towards the end of the song. Part 4 is the most organic song of the album and has sounds of rain and laid back ambiance for almost eight minutes.

I did not hear anything new from the band when I checked this album, they are at a certain level without degrading, but not improving either. The eerie music of Lustre needs to be dealt with at night, only then will it be admired more, even though this one is not as enticing as other pieces of his.